326 - Sniffing around the crab traps 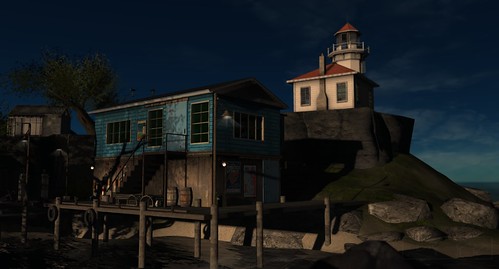 Dim Sum sniffs at the smelly crab traps, but she's glad they're empty.


At least I think they're crab traps. The real-life crab traps I know are baskets.

I realized that the waterfront is really just a small part of the sim; there's a whole lot more to explore. So, the next series would probably still be in this sim.

The "Small Boathouse v4" was created by kejwla.anwyl. 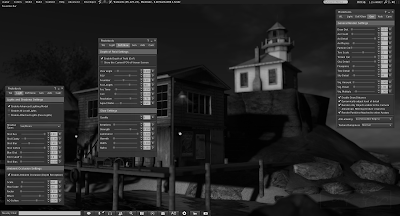 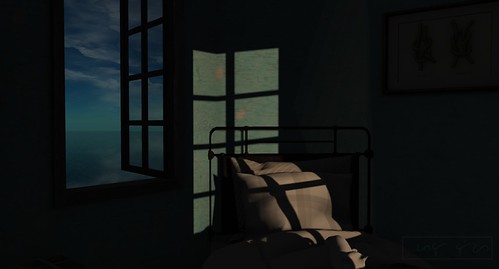 Dim Sum snuggles on the cozy bed and hopes the owner doesn't come back soon. Not that anyone could make her move from her warm spot.


This is a very small room in the lighthouse and I had to really squeeze the view angle. I would love sleeping in such a bedroom with a great view out the window like that, even if it's really small.

As in #323, this one hints at another unseen window because of its shadow. 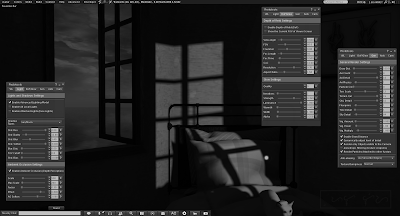 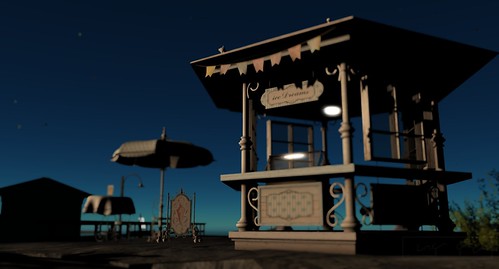 Dim Sum watches the stars twinkling in the sky on her perfect perch.


I love the blueness of this sky. I modified the light with a tinge of orange/tan though. The surrealism of the light felt really oddly quiet and peaceful, so I used it for the whole series.

The ornate twirly decorative elements added cuteness to this sim. And it's a nice juxtaposition to the solemness of the windlight. 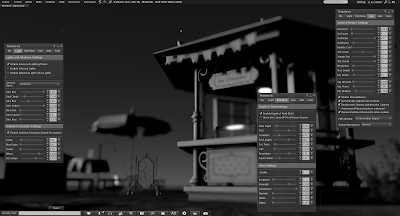 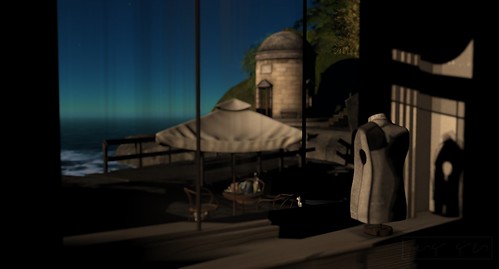 
I was surprised to find the streaks on the window after I turned on the DoF. So I took advantage of that. I also loved the shadows next to the mannequin. I would have wanted to put more focus on the mannequin itself, but this is good.

These images were taken last night but I was too sleepy to post them.

The "Soy. Men's Torso Mannequin with props (short)" was created by Soyoy. 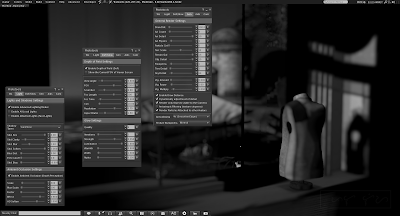 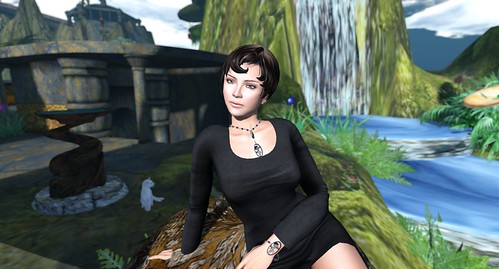 
And here's the second of the two recreations of Svarga photos from 2007: 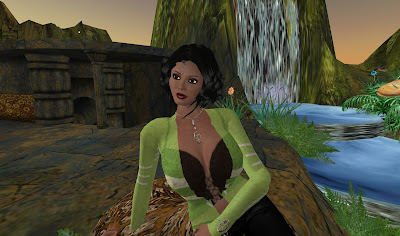 The birdbath wasn't there when I took the photo in 2007. And neither was the white cat. ;)

Everything else was there. The outpost building in the top left was already there, but the 2007 photo didn't have objects rezzed that far. My machine at the time couldn't do it.

Also, the flowers behind me actually changed colors every time a bee came along, and I just didn't want to wait for both to match the colors in the old photo.

I couldn't find a "modern" mesh outfit that is similar to the one I wore in the old pic, so I just settled for a black dress. But the jewelry is the exact same one.

See the first one here. 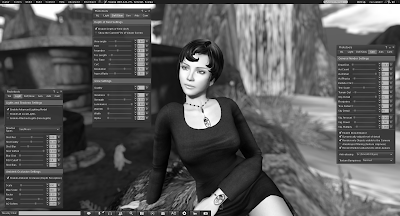 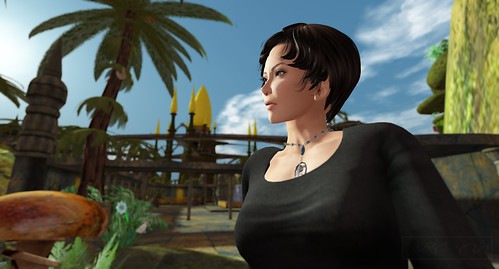 Dim Sum patiently waits for Opal as she digs out an old picture.... Or two!....


Okay, the sim is Svarga. And that is very, very significant! Svarga has been around forever!

So, these two "Reminiscence" pictures are actually recreations of two of those old pictures. Here's the first picture from 2007: 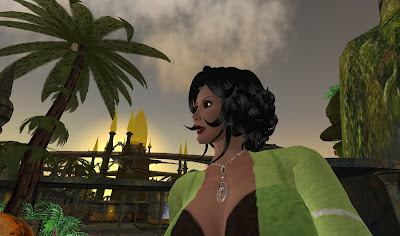 Of course, the point is that Svarga hasn't changed much. But Opal has. And the viewer has. And my machine has.

I'm using Firestorm now and I think I was using the SL viewer in 2007. That might be why I can't quite get the perspective accurately. Or it could just be changes in the technology. But it's close enough.

Anyway, we now have windlight, shadows, DoF, mesh clothes, and mesh bodies. But I still have the same necklace and bracelet, which is also very, very significant but for a different reason.

See the second one here. 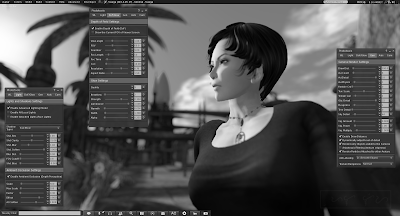 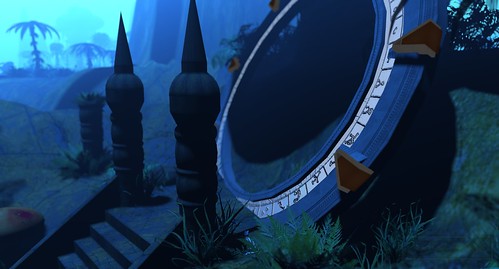 Dim Sum tilts her head and tries to decipher the strange markings. She intuits that it says, "Only scifi nerds can read this. Or at least, they pretend they can."


I don't remember seeing this Stargate in Svarga in the past, although I had seen it in many sims in the past. It's a teleporter actually, but I didn't test if this one works. 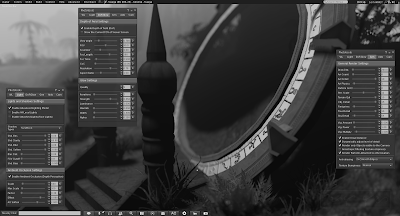 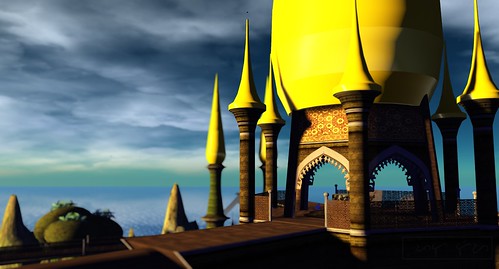 Dim Sum remembers the giant bee at the landing point and wonders if this is its hive.


I feel a strong sentimentality about Svarga. In fact, I mentioned it in my book, because a significant event happened there. (You can read about it in the excerpt published in Hamlet Au's New World Notes.)

Of course, in "the olden days," we didn't have windlight either, and I'm not sure that I chose the right lighting in these images. Maybe I'll come back later and do better images when I have more time. Those probably won't be part of the 365 project, but they'll be in my Flickr stream anyway.

Some things are missing from the sim now. There used to be a sea dragon in the water in the outskirts of the sim. I remember showing the sim to one of my younger nephews, and that dragon fascinated him. We were using his mom's account, so we changed her avatar to a bright blue dragon, and he loved that.

A boat used to sit just outside one of the side gates, and hammocks used to hang under some of the structures, but those are gone now too.

Even without those details, Svarga still has much in it to launch the imagination to a beautiful paradise that used to live only in the mind of one avatar called Laukosargas Svarog. 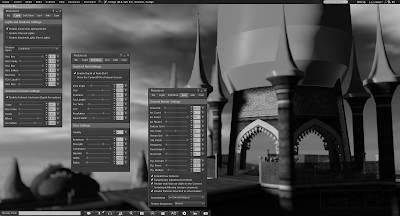 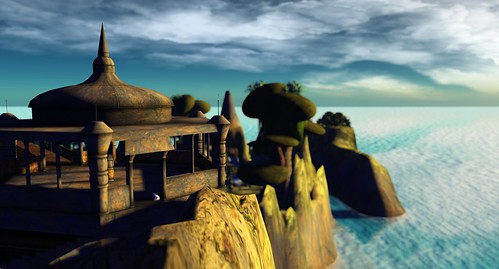 Dim Sum imagines herself as a guard dog and sits at the doorway.

But I don't want to end this project without doing Svarga!

The artificial life experiments were so nerdy that they were awesome. But it seems that those experiments are not done anymore, although the plants, that seem partly familiar and partly alien, are still around. They probably just don't reproduce anymore.

I am very, very happy that Svarga was sold when Lauko couldn't afford it anymore. I was sad to realize that the new owner chose to make it a private sim. But after seeing some pictures of it in Flickr recently, I realized that it's open to the public again. Thank you, thank you, thank you to the owner! 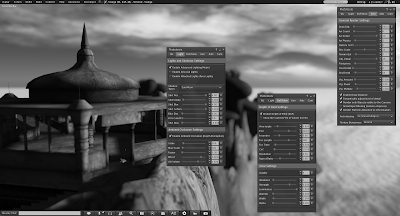