Dim Sum looks behind her to make sure that the pride is still following her. She'll have to recruit more lions and lionesses to make her "pride" bigger. (As though it could get any bigger.)


I had to derender a willow tree and the background mountains, because the alpha bug and the shadows are making the willow tree look like cylinders. Well, it *is* made of cylinders, but you know what I mean. Then I decided to delete the mountain because the windlight is making it look flat. Better with some clouds there instead. 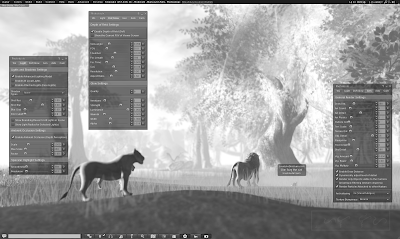 Dim Sum listens to the pirate tell tall tales while his lovely hostage rolls her eyes.


I was just setting up when I got a ding-ding. And then another. The first turned out to be from a pirate, and the second from his hostage.

The very charming (and very funny) couple agreed to be in my picture, so while I was playing with composition and windlight, the pirate regaled us with stories about how he kidnapped his lady love from Caledon and demanded a large sum of Lindens and an Egg Mcmuffin. Apparently, nine months later, he hasn't gotten the ransom yet. Instead, he has a bounty over his head now.

The pirate said, "You know, I once had a zombie chihuahua head as a pet."

And his hostage replied, "I'm going to stop being surprised by the things you say. It just wastes energy." 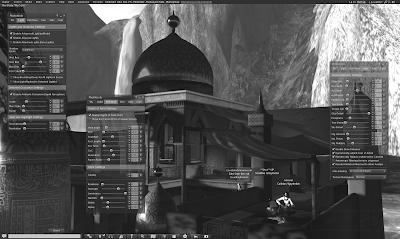 Dim Sum tries to extract the secrets of the well from the bunnies, but they just sat there nibbling at who-knows-what.


Same spot, different windlight. Actually, it's the same windlight, but more fog with the second one. 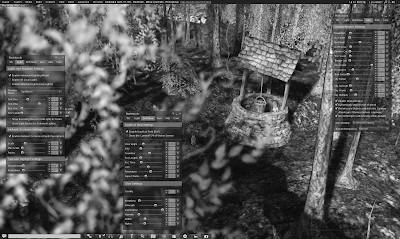 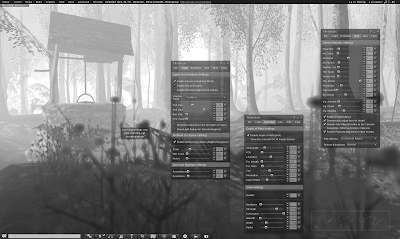 Dim Sum spotted two bucks and wonders what on earth they find so appealing about plain grass.... Blech! ... On the other hand, if it were catnip, ....

Mz took me to this spot after the photoshoot yesterday, and the view of the valley from up here made my heart leap up to my throat, so I thought I'd make it my next photo. :D 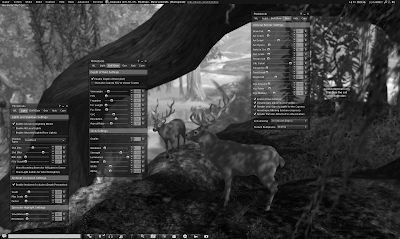 Mz, Dim Sum, and Matty, the white Bengal tiger, quietly enjoy a lovely morning under the warm Indian sun by the banyan grove.


Mz Marville sent out notecards inviting people to check out her newly redecorated sim, which she shares with Autom Nightfire. She promised to show me the secret place, so I just had to go. She was logged in and IM'd me that she found Dim Sum. :D

I noticed that Matty, the white Bengal tiger, was floating above ground a bit, so she came over and gave me permission to edit her objects. (The girl trusts me too much.... *evil snicker*) Anyway, we ended up chatting about

This was yesterday morning. We ended up chatting about mermaids, machinimas, mesh, and everything else for hours after that, until we were both too tired (around noon PST), so I just went to bed and didn't get a chance to upload until now. 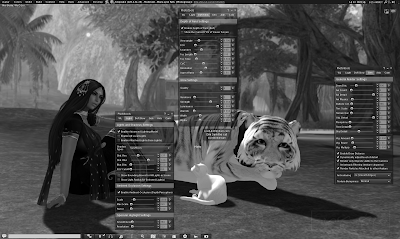 Dim Sum wonders what kinds of fish are in this river as she peers into the water.

And for some reason, it feels like I've done this image before, or something similar. Kinda like a deja vu. Maybe it's the colors. Or the subject matter. 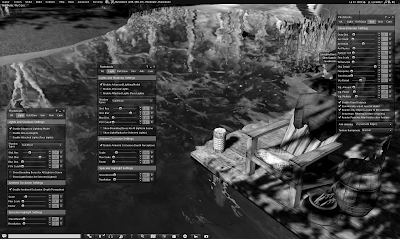 Sing a song of sixpence,
A pocket full of rye.
Four and twenty blackbirds,
Baked in a pie.

Dim Sum makes a note to Google the recipe for blackbird pie. But she needs "three and twenty" more blackbirds. If only she had thought of catching all the blackbirds she had seen all over the grid.

Sunshiny day! I couldn't get it quite right though. But I think this is the first time I've used windlight with the sun set to noon or close to noon. But there were too many trees behind the camera so this was the best way to light up the front. I could have turned on the local lights (that yellow thing in the middle is a light), but it felt incongruent to the time of day.

Maybe I should file a jira to request a feature to tone down the strength of local lights in Firestorm. Or to pick and choose which local lights are turned on or off. One day, when I have time....  ;) 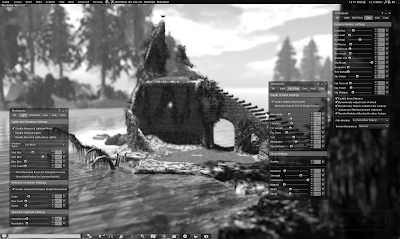 Dim Sum is mesmerized by the flame. And the nice warmth makes her sleepy again. So what if she just woke up from a nap....


It's neon-y today. :) I didn't even modify the windlight this time. It's difficult to do lighting indoors so this doesn't have any shadows (which would have made the picture more interesting), but I turned on local lights which added the nice yellows and golds from the fire. 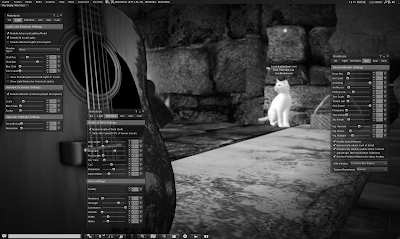 Dim Sum wonders if she could safely jump on land when the abandoned ship crashes into the trees ahead.


Runestone, Syrinx, and Yes are pirate RP sims. I haven't seen much of it yet, but I've already found many romantic spots (and romantic poseballs).

The antique ship with the gorgeous textures is "The Crow v.4.0" by Lia Woodget (Black Spot Shipyard). I own one of her ships, although I unfortunately do not have space for it anymore. 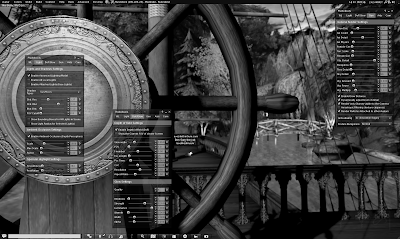 
This kinda reminds me of my childhood summers, actually. The tropical plants. The sunset. The water is too calm here though. We spent our summers by the sea, so the water is more agitated. Much more. 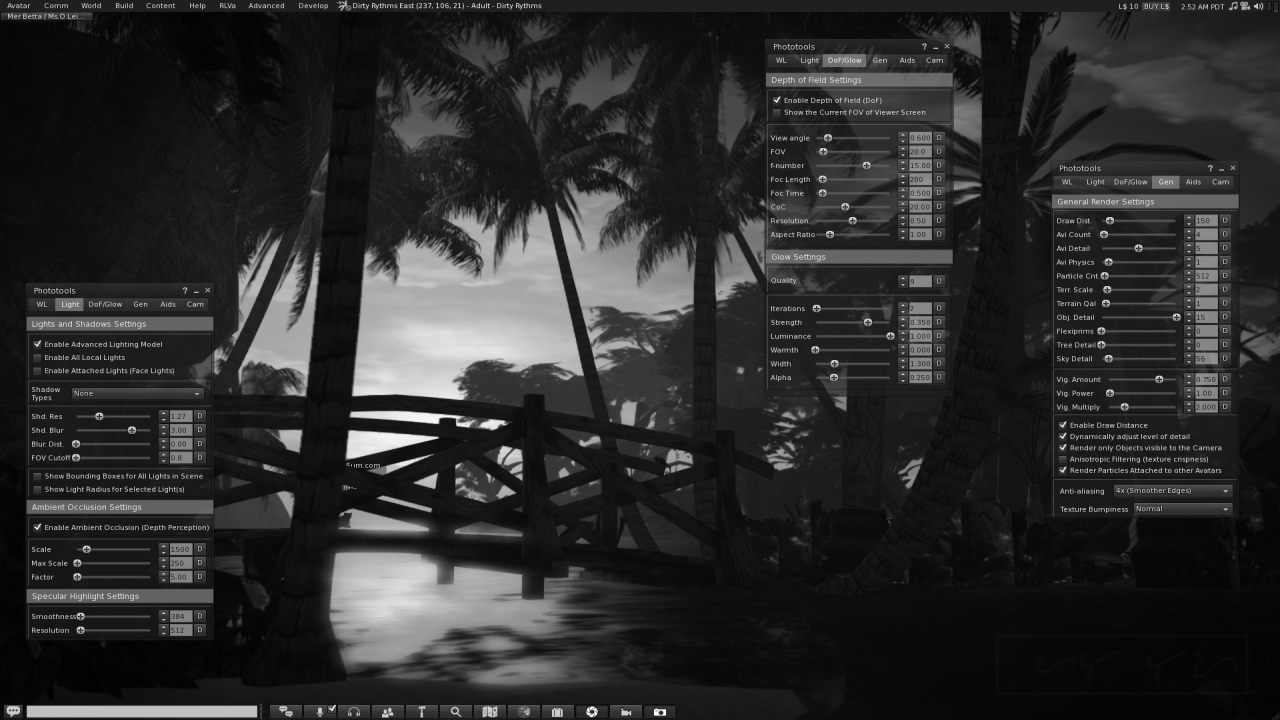 Dim Sum listens to the pitter-patter of the raindrops on the leaves. If only the lightning and thunder would stop already.


This rain reminds me of  my childhood. And it's not made of particles; it's actually made of prims. It's called "Best Rain" (appropriately, I think) by Xavier Novelli (Dwelling Quay).

The broad-leafed plant called "Allocasia Wentii" was created by Magdaleine Demonista. Again, this might be miscategorized because Google shows narrower leaves for "allocasia wentii." Here's what it looks like in daylight: Any botanists out there? 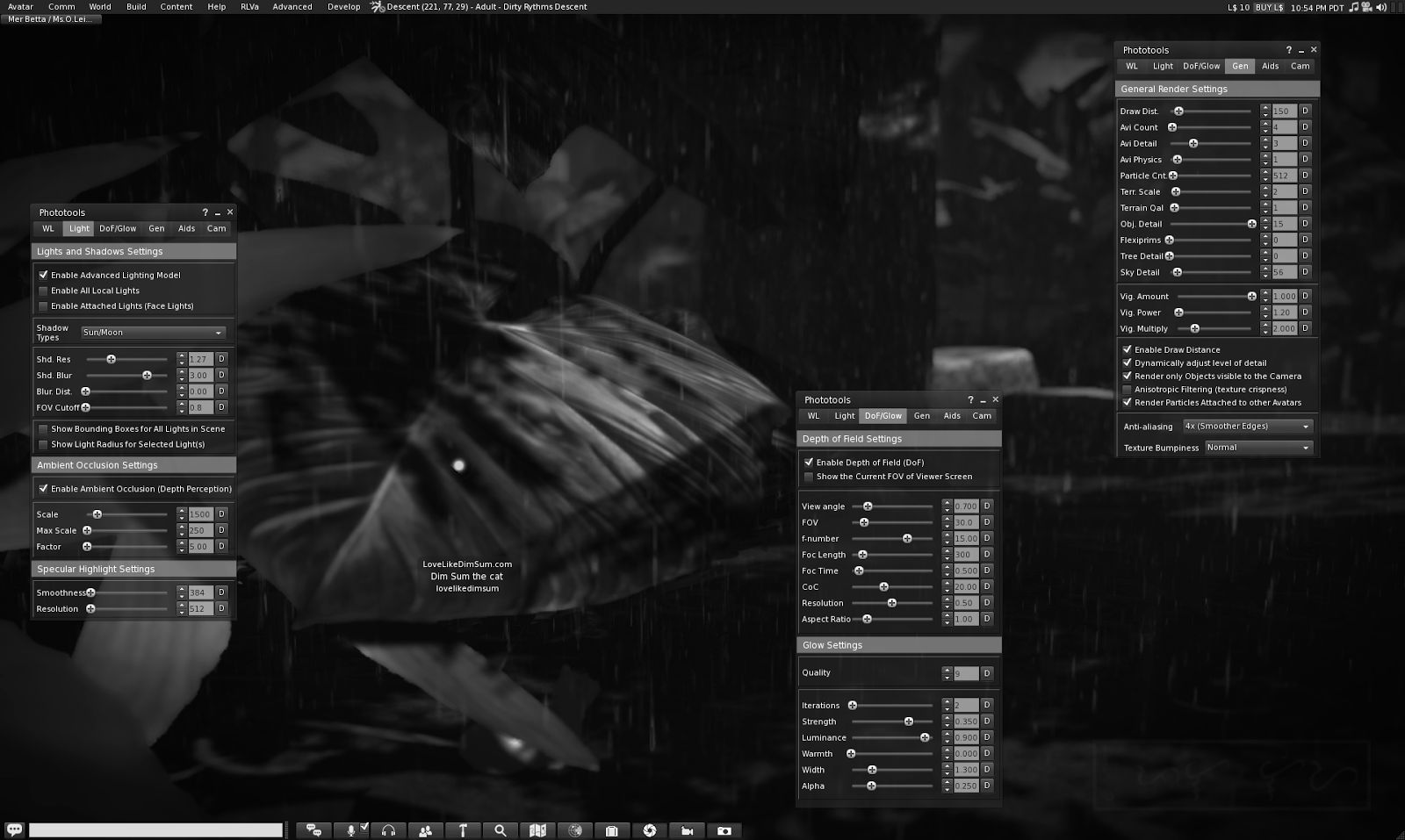 
Hmm, I seem to be doing a theme of tropical plants. :)

I love the diversity of plants in this sim. This one is called "sabal multiforensis" (created by Magdaleine Demonista), but Google doesn't return anything for that. In the Philippines, we call this plant "anahaw" (pronounced like "Anna, how?" except with the accent in "na"), which is from the genus saribus rotundifolius. 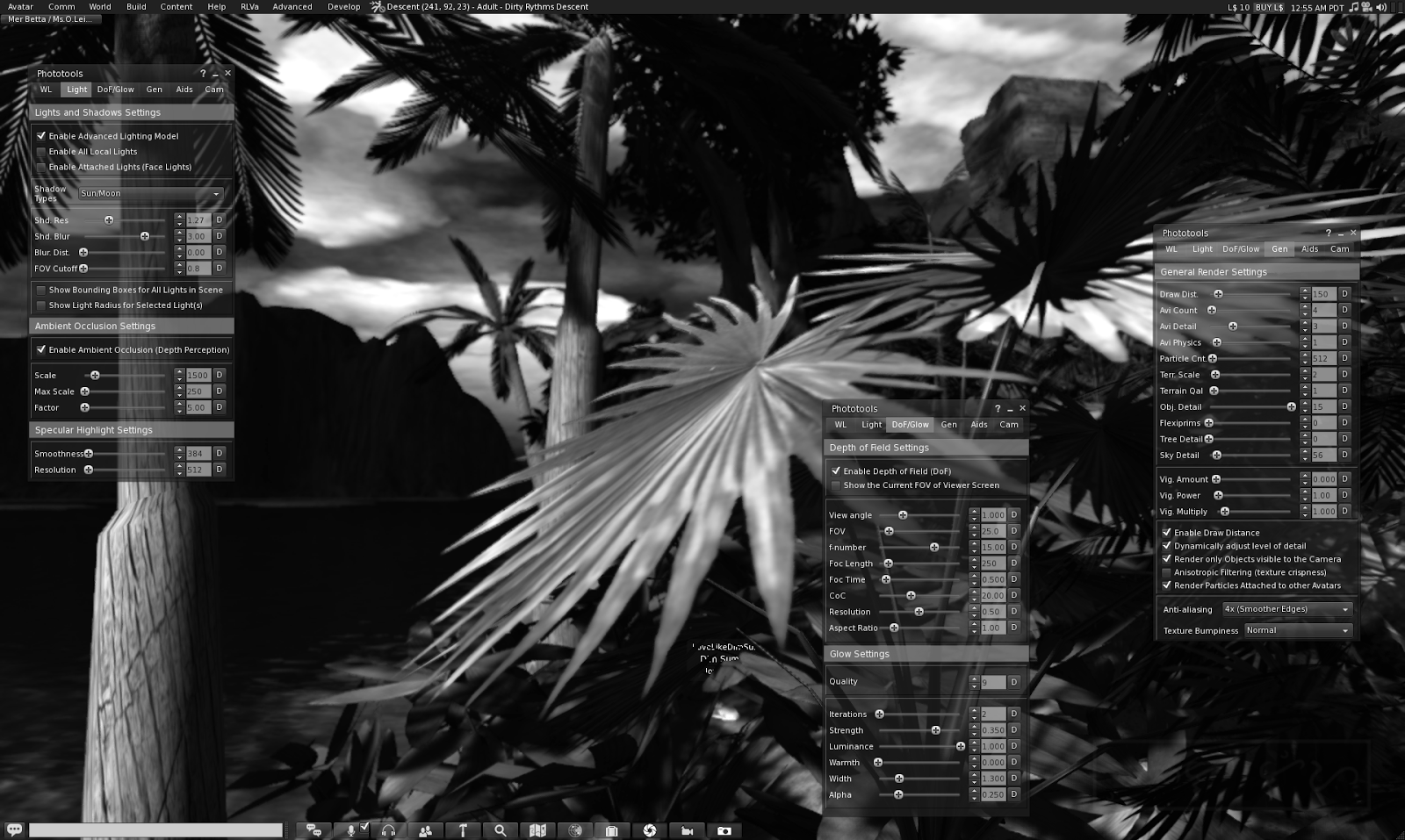 Dim Sum lied in wait for the boat to come closer. She planned to hijack it and then extend her claws to force the humans to give up the fish that they caught. But she fell asleep while waiting for the boat. When she woke up, humans and fish were gone.


I can't make up my mind. I have a preference for the silhouette version (a) for composition and focus, but I like the play of shadows on the palm leaves in the second image (b). 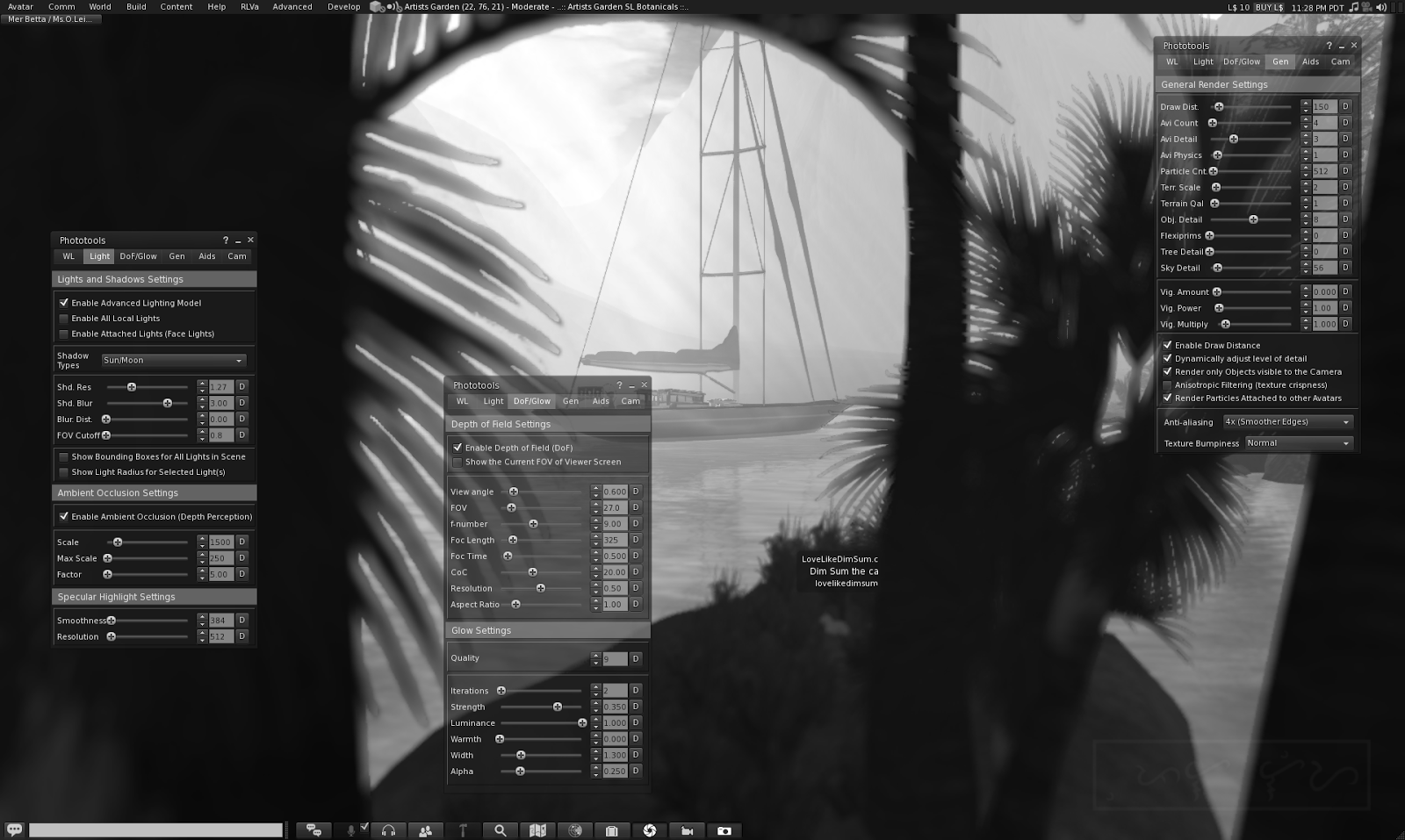 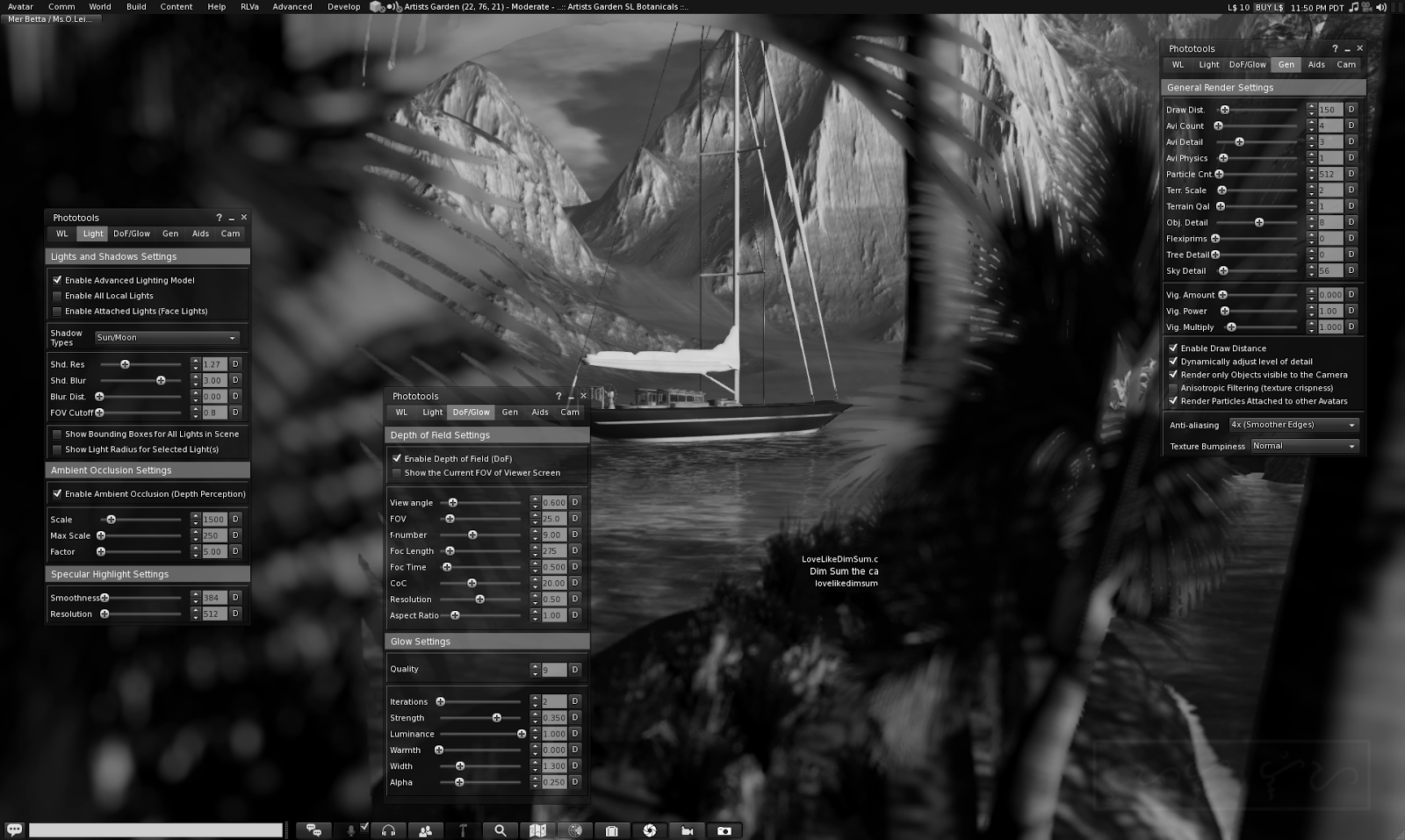 Dim Sum thinks of several koans and wonders how different koans are from riddles.


There are three Buddhas.
The first Buddha is made of stone.
The second Buddha meows.
And the third Buddha looks on.
Can you find all three?

Strawberry's Zodiac Meme for this week isn't too time-consuming, so see below for my responses to her questions. 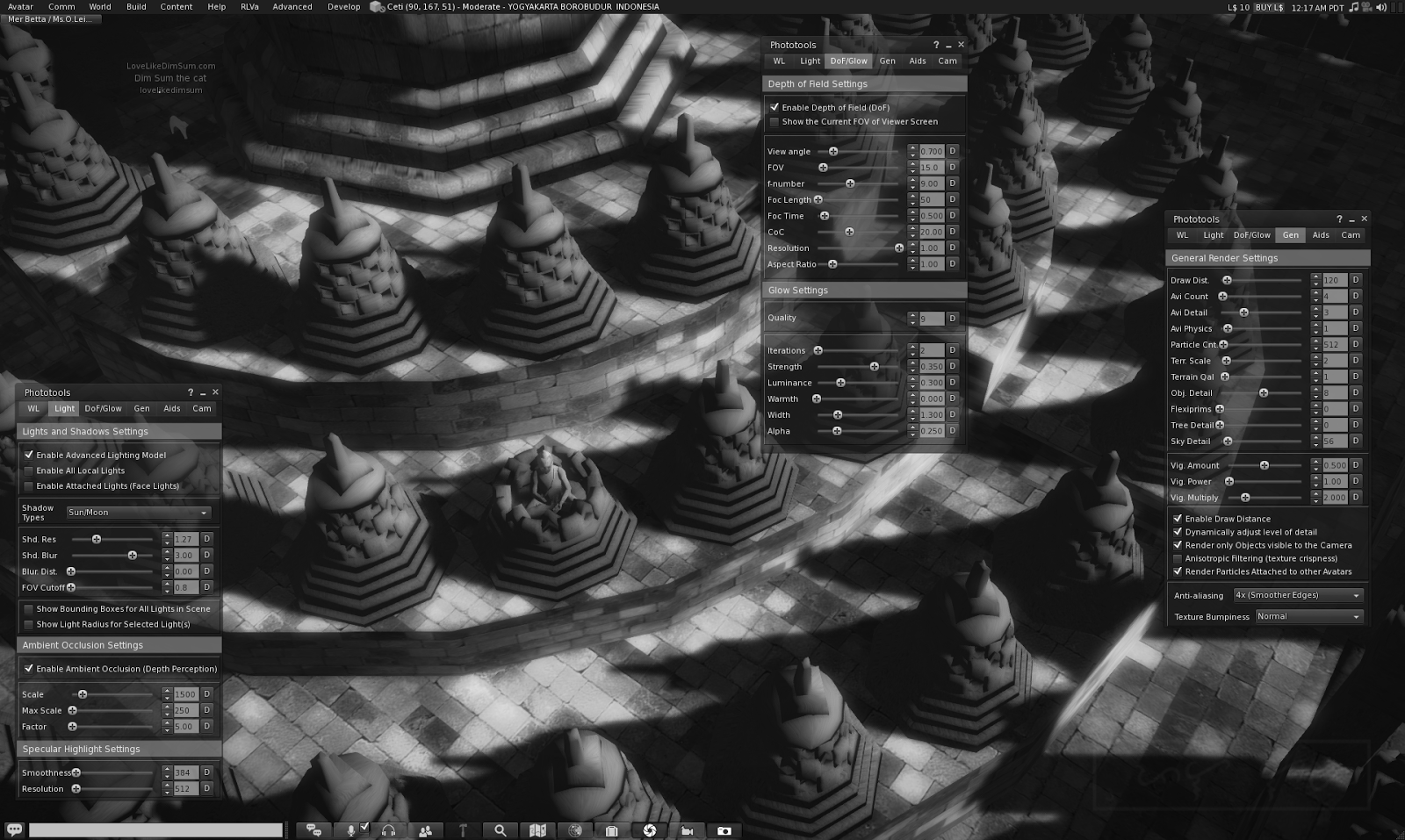 One of my RL best friends once asked how someone as analytical and logical as I am could believe in something as superstitious as astrology. Well, I don't really *believe* in astrology per se. Let me explain....

Do you feel your sign’s attributes reflect who you are?
I think, at this point, it's a chicken-and-egg thing. I have been reading and studying astrology since I was a child. (When I was in grade school, my mom had astrology and metaphysical books, and I read all of them, along with her romance novels and my dad's engineering textbooks.) At that impressionable age, I'm pretty sure I've internalized the descriptions for my sign, so I *became* my sign. Well, up to a point.  ;)  (That last sentence could be the Libra indecision, btw. ;) )

Have you ever been to a psychic or astrologer either in RL or in SL? (Are there any in SL?)

Do you read your horoscope daily and try to follow any advice, recommendations or warnings it may have for you that day?
There was a time when I saved horoscopes from different sources to see which were more spot-on. The daily ones were the worst. I follow a monthly one, which seems to be more reliable and more specific, at least from my perspective. But, I never calculated what the probabilities are to compare it with coincidence, so it's a subjective comparison, really. :)

I view horoscopes as something like a weather forecast. It might rain, it might not. Who knows? All they're saying is that there's a higher probability of raining that day.


Do you have very strong feelings about astrology, either negative or positive?
Not very strong feelings. I'm more of an observer than a believer. If you think about it, it's a great opportunity to observe how our beliefs create our realities. Because of quantum physics, science and metaphysics are slowly coming together. So, really, anything is possible.  ;)

Dim Sum stretches as she wakes up and realizes that the sun has moved and she is now in the shadows. 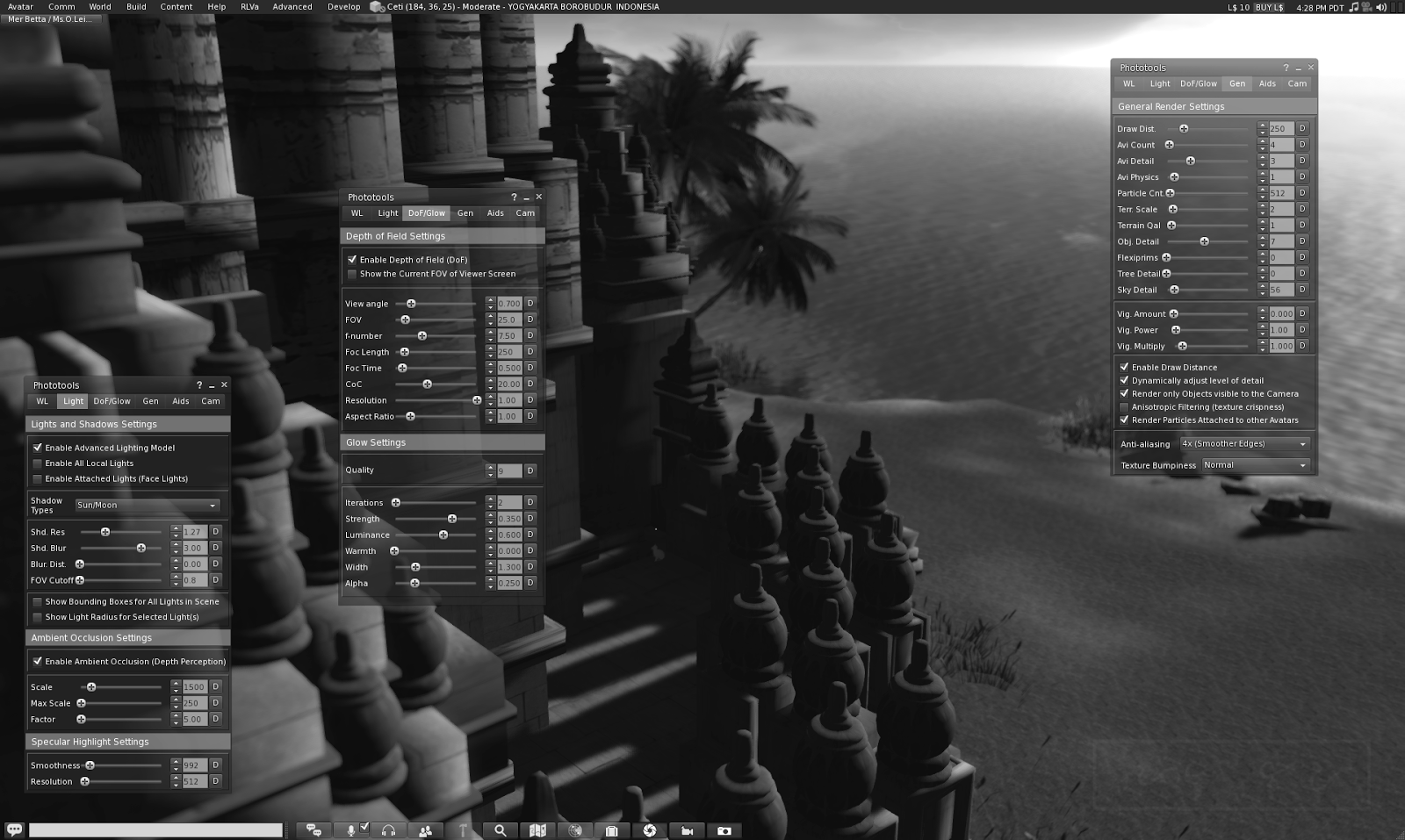 Dim Sum, the low-budget movie director, tries to direct the cameraman, but he doesn't seem to be listening. She makes a note to fire him the next day.


This one is near the landing point. Nope, it's not an avatar; it's a prim cameraman, created by Debora Stine (DBy Mesh). The moving grass immediately in front of Dim Sum was created by Alex ACS.

I haven't done Strawberry's memes for a long while, and this past week's meme is fun, featuring a flat cutout of Rodvik Linden. I decided to do a machinima, instead of a still photo. Dim Sum, the low-budget movie director, tries to direct Flat Rodvik, but he doesn't seem to be listening either. She makes a note to fire him the next day and hire real actors. Meanwhile, she inadvertently buries him in the ground.... Oops.


(If you can't view the video above, view it in Flickr. I'm still trying to figure out why YouTube is pixelating it, even if it looks fine in Flickr.)

Many thanks to:
* Ary Luke (aryluke) who granted permission to film machinima on his sim
* "dobroide" in freesound.org for the grassland sound file


Ary Luke, the owner and builder of the Yogyakarta Borobudur sim in SL, is Indonesian and he recreated his hometown, including a 9th century Buddhist temple in Borobudur.

After giving me permission to film machinima on the sim, Ary graciously taught me a few Indonesian phrases:
Terima kasih, Ary! :D 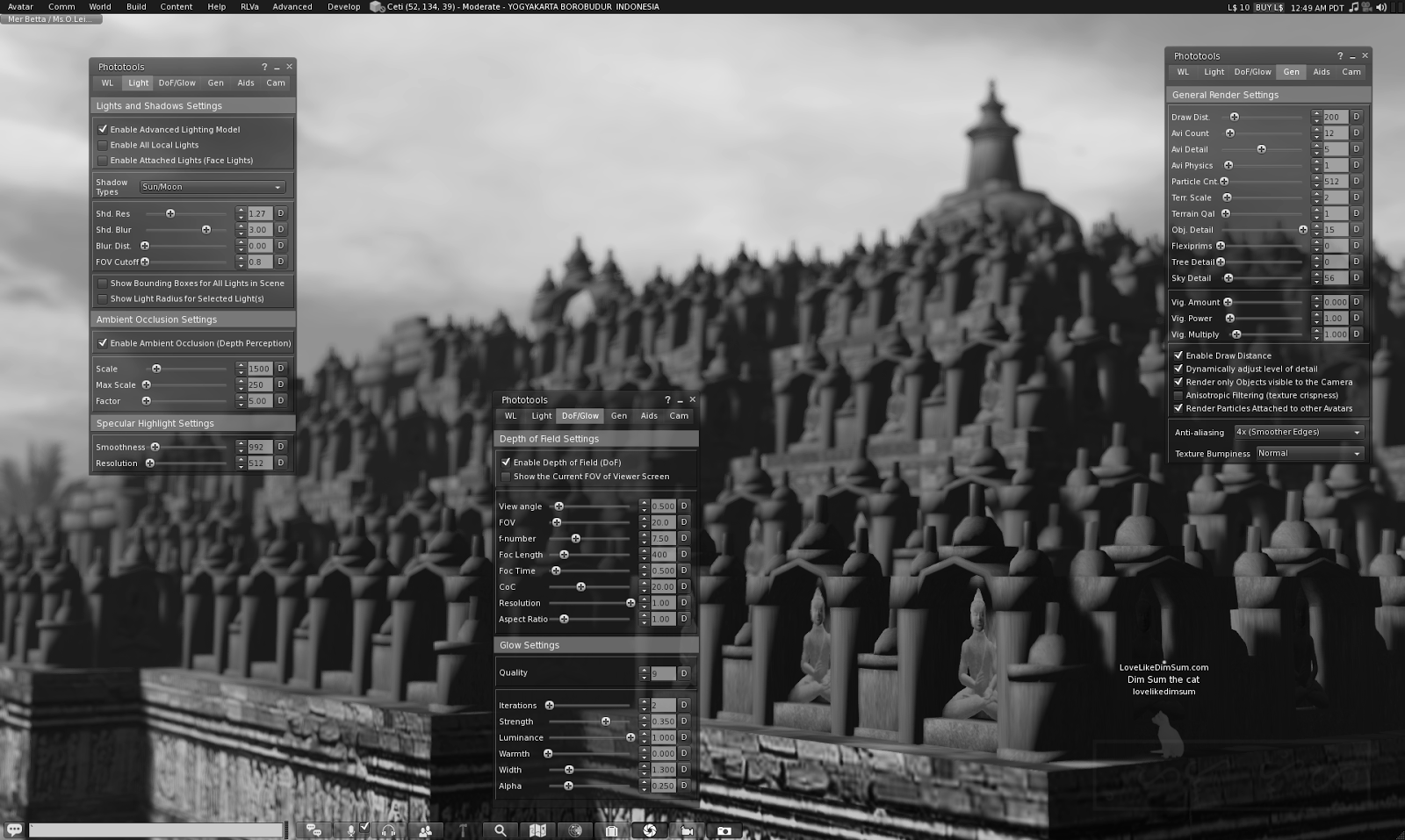