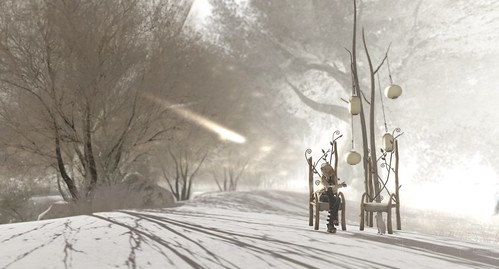 Dim Sum takes shelter under the chair while she chats with her newfound companion.


Jewel was looking for places to take pictures. I needed something more interesting, so I asked her if she would be in my picture. (I was too lazy to dress up Opal appropriately. :) ) And she agreed! Yay!

I was already done with the windlight and composition, so I didn't take too long. :)

Btw, that "meteorite" is a streak of light that goes toward the trees in the back. It's not really heading our way. ;) 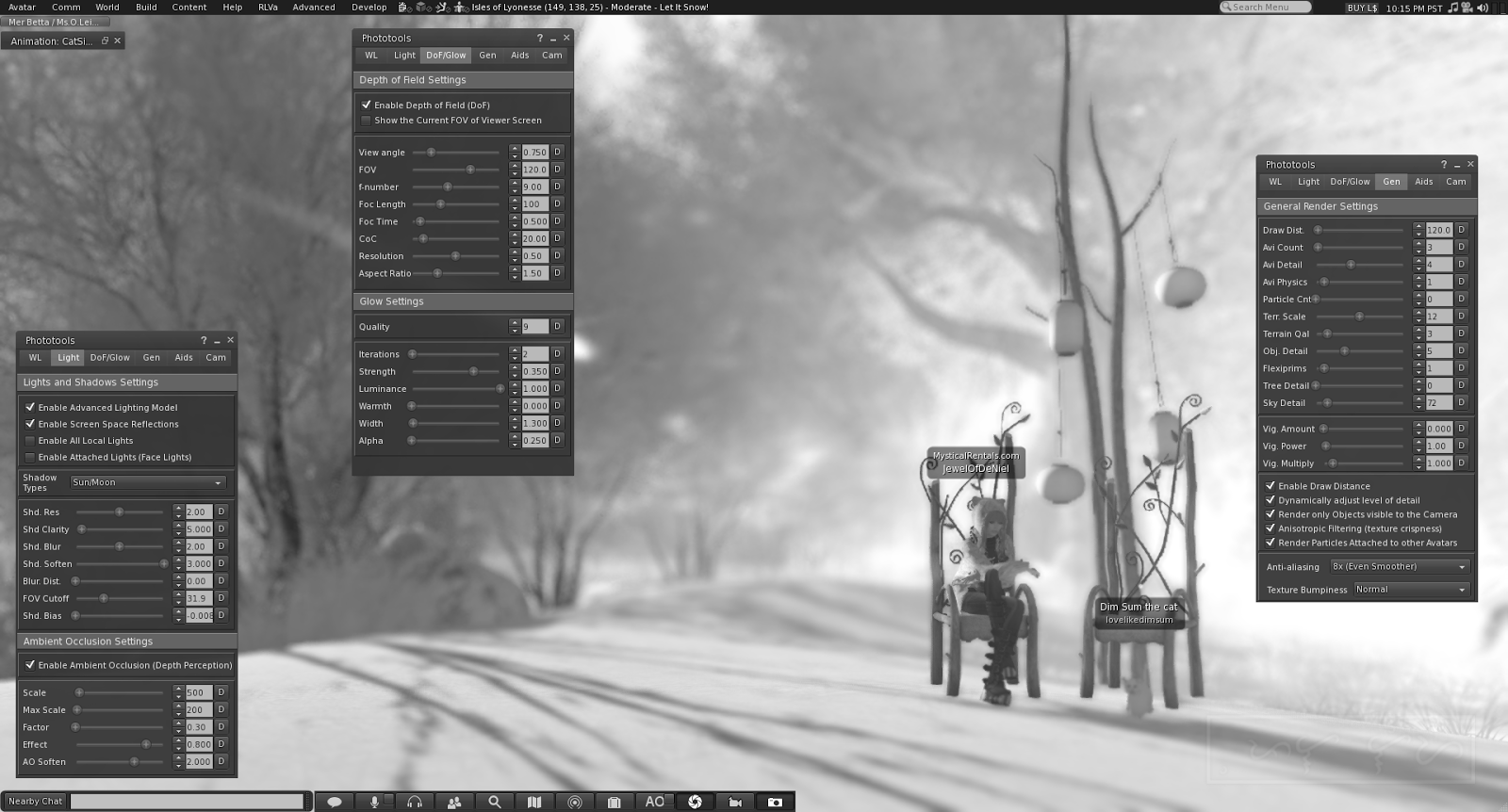 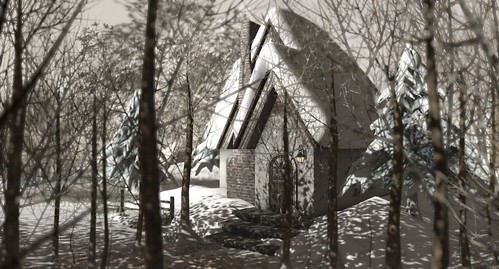 Dim Sum sniffs at the sugary smelling scent of baking pies in the crack of the door. She scratches to try to catch someone's attention to open the door.


At first I thought this was my least favorite in today's set, but I realized it's actually cool. Today's set is almost sepia, but this one shows a bit more color in the pine trees and in the porch light, making it look more like a colorized antique photo. 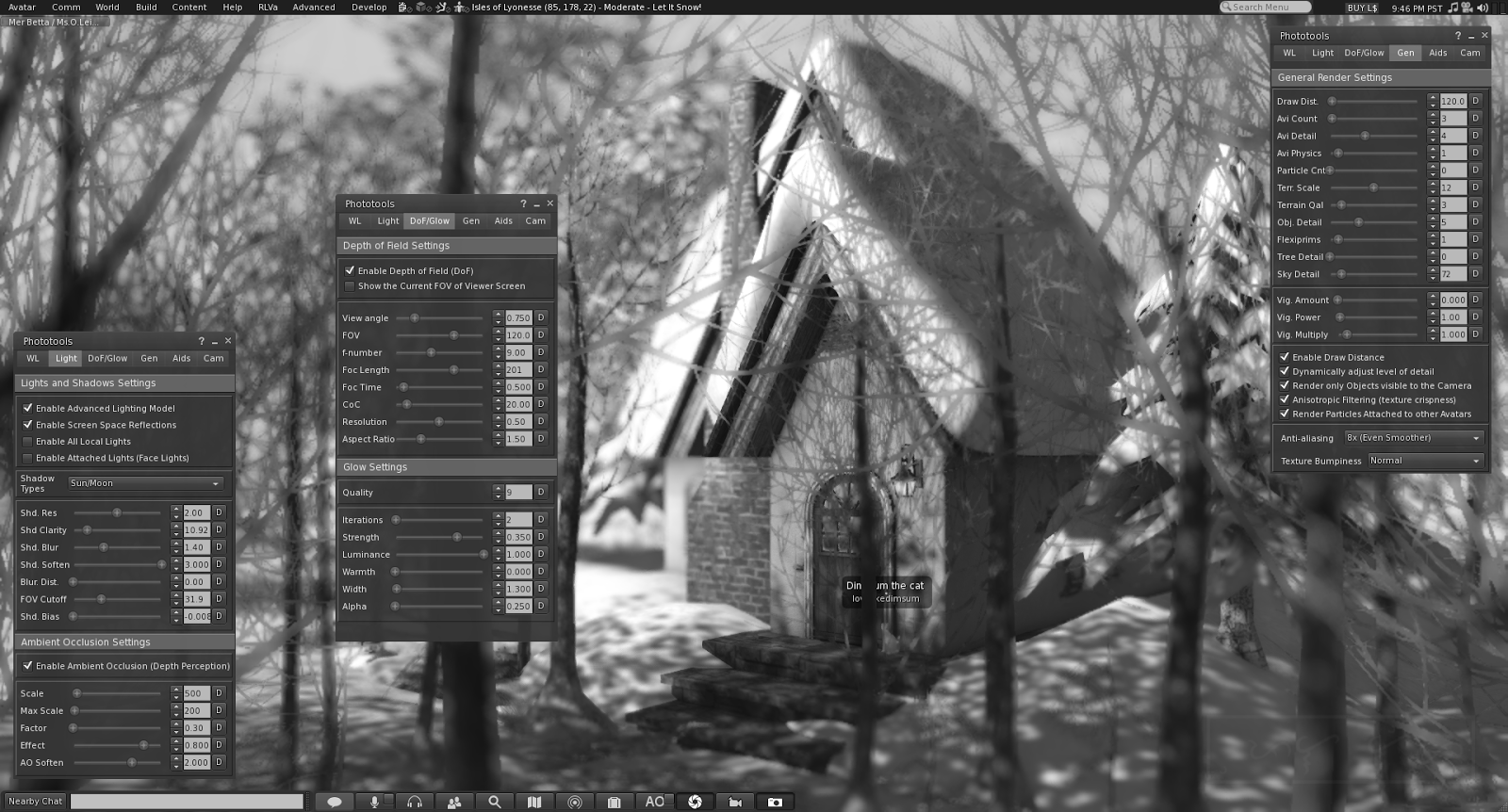 288 - Bare treetops creating a mosaic of the predawn sky 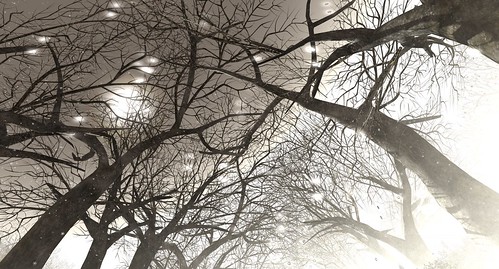 Dim Sum tried to get closer to the twinkling lights and pawed at the air, but they were still out of reach.


That title -- "bare treetops creating a mosaic of the predawn sky" -- was actually something I had written in my writing journal on March 17, 2000. Almost 15 years ago. :)

Earlier that day, I was driving to work and noticed the beautiful patterns that the bare branches made against the sky. The phrase came to my mind so I wrote it down as soon as I could. (No, not while driving. ;) )  I thought I'd use it as part of a poem or a short story. Well, a title for a photo is good too. :) 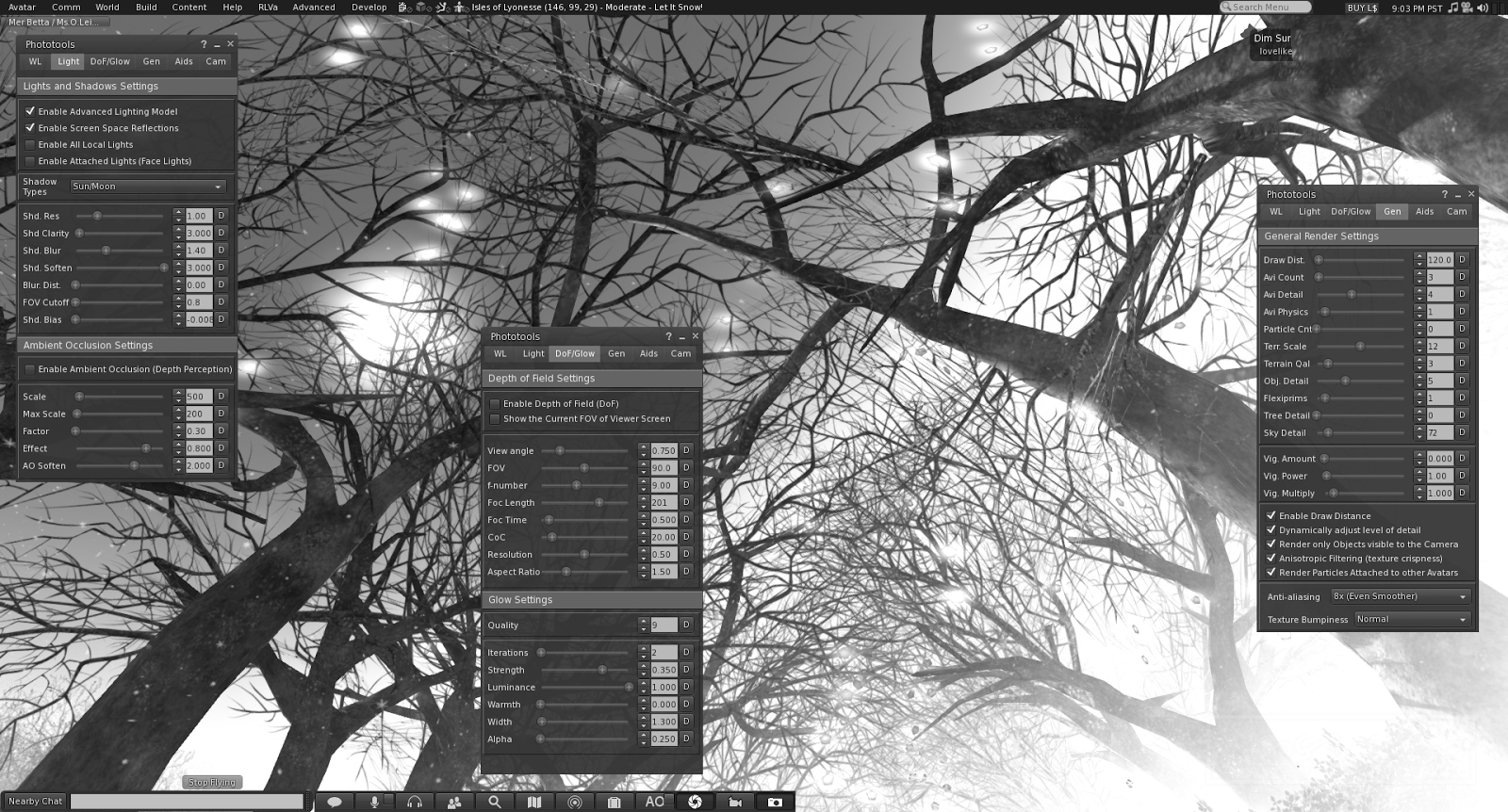 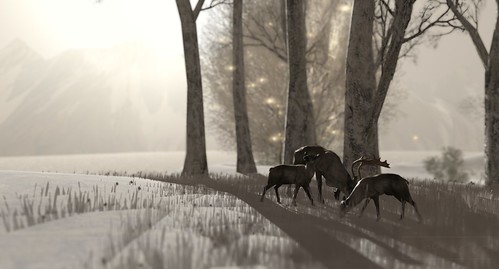 
I think this is the most romantic sim covenant I have ever read: 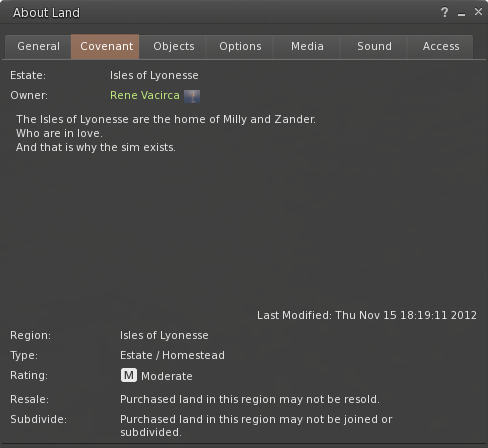 How heart-melting is that?!?

I don't know if the current owner is associated with Milly or Zander. I hope he knows he has the coolest and sweetest sim covenant in the grid. :D 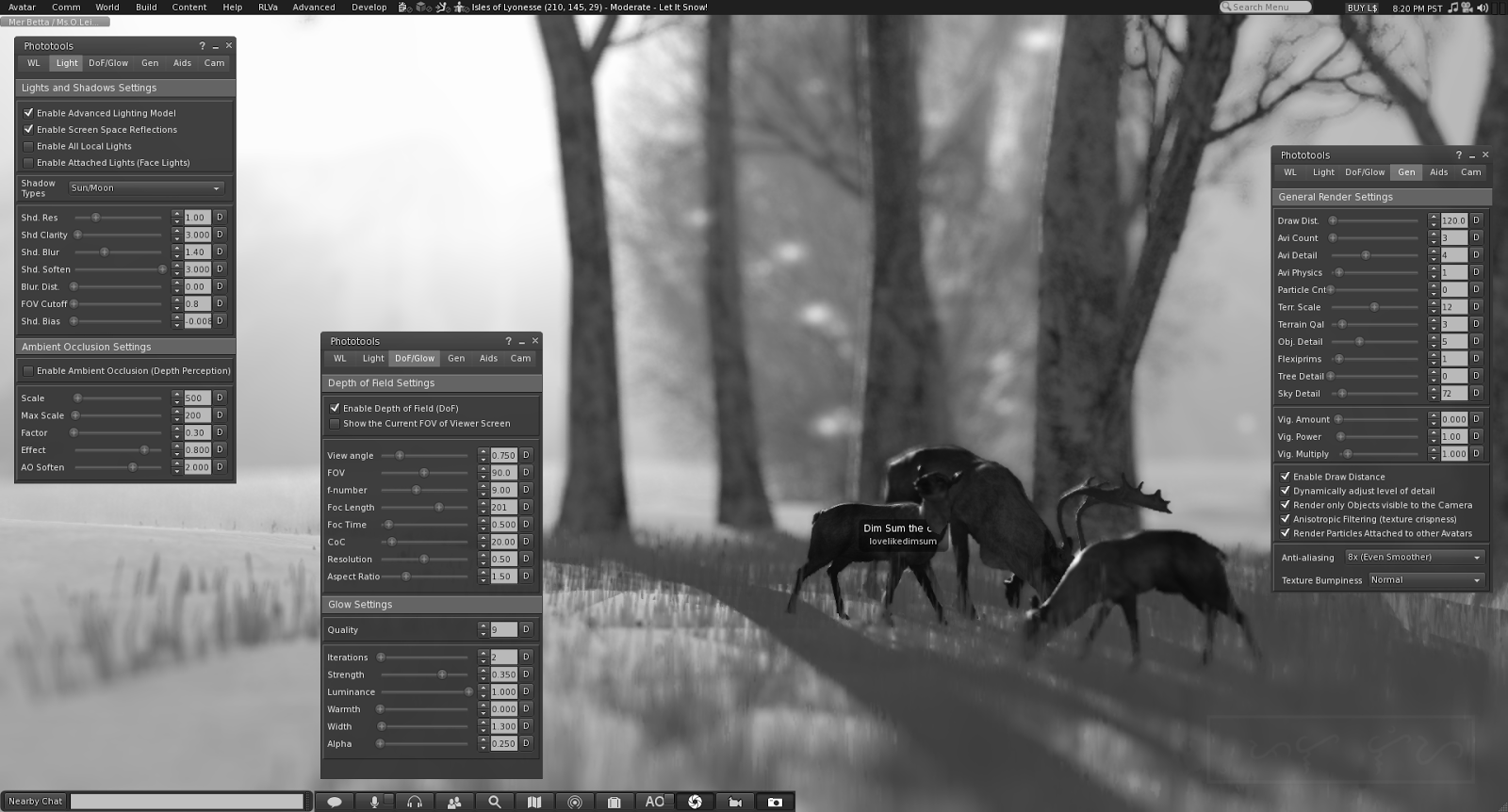 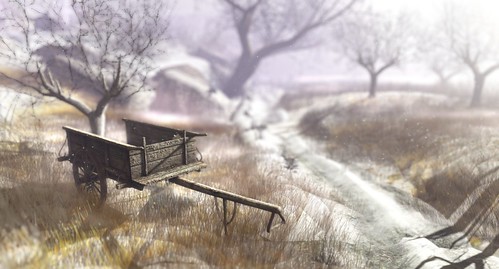 Dim Sum hops on the cart which bounces a little. Then she settles down to groom her fur.


I think this is among my most favorite in the entire 365 project. It almost looks like a painting. Sometimes, these happy accidents surprise me. :) 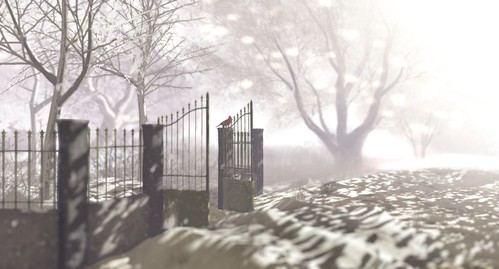 Dim Sum ignores the frantic robin's attempts to shoo her away; she nonchalantly moves even closer.


More play with light and shadow. I had a bit of a difficulty getting a good balance here.

By the way, the windlight in all four images in this week's series originated from the same predefined windlight setting, but I changed it slightly, so it's getting lighter and lighter. 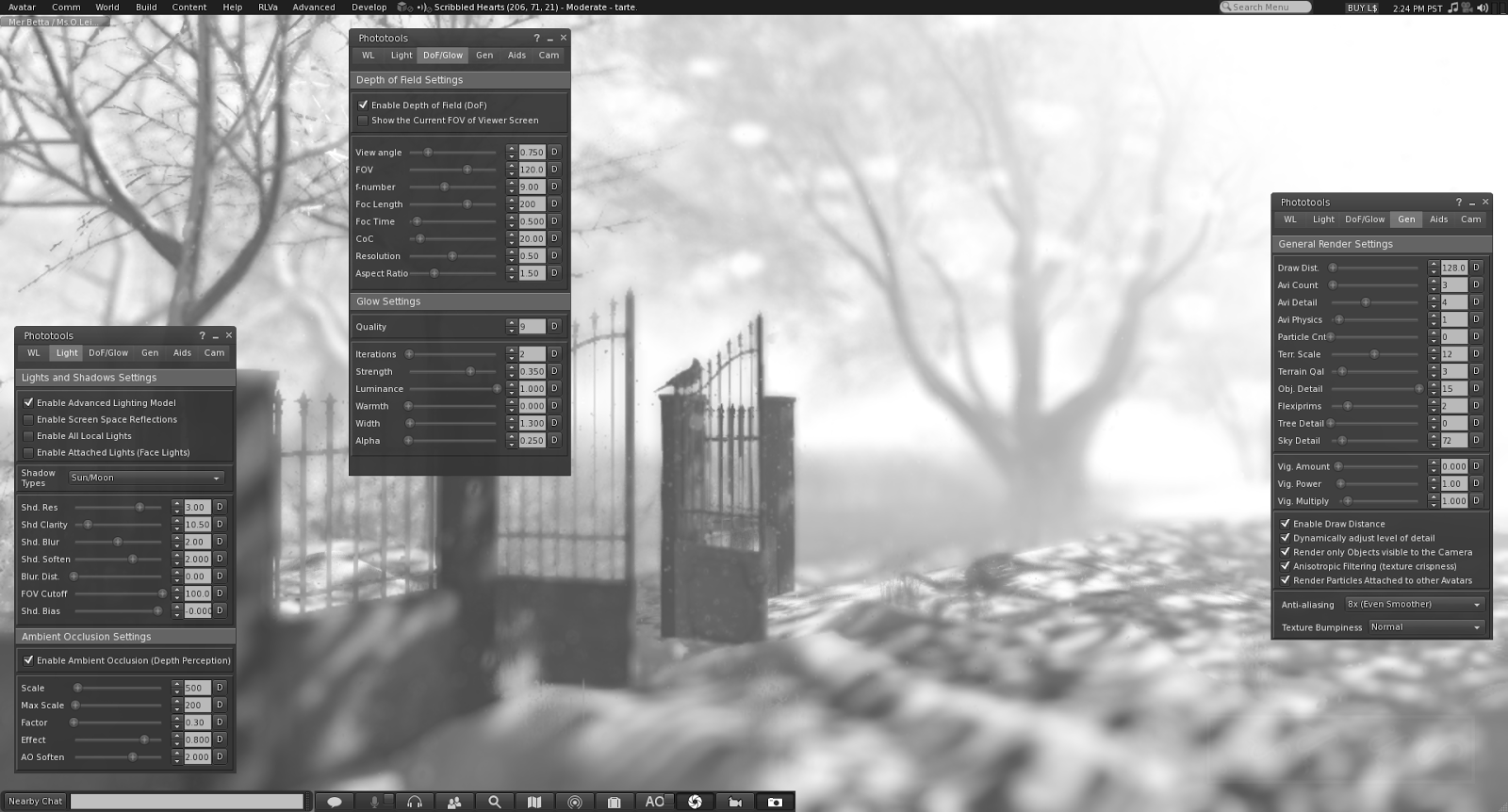 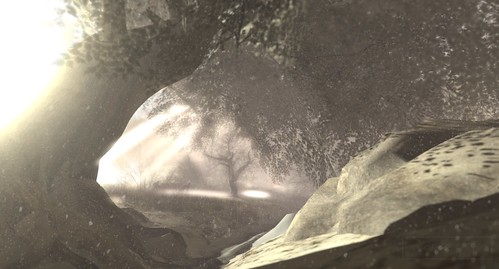 Dim Sum narrows her eyes as the rising sun's light slips through the leaves.

The "HPMD* Garden Tree07 - snowy b" was created by Sasaya Kayo (HPMD). 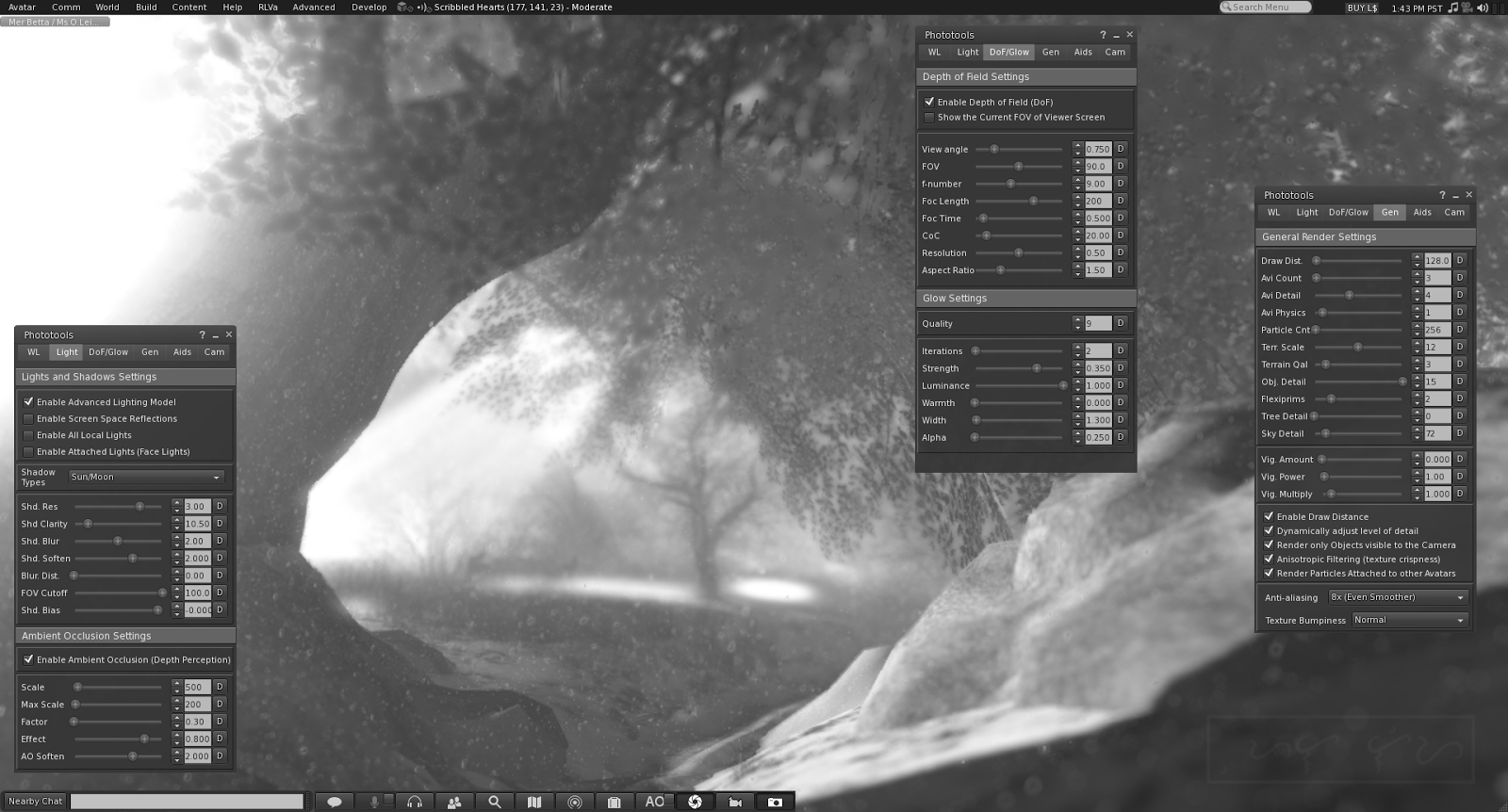 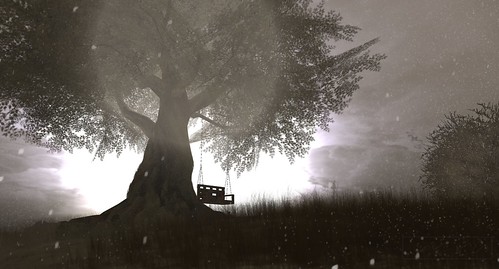 
I love that the windlight created something like a big flare. It adds interest to the picture. This is a bit out of my usual because the backlighting flattens everything. But it gets better in the next three pictures! :D

The "tarte. bench swing (light)" was created by alixxbella (tarte.). 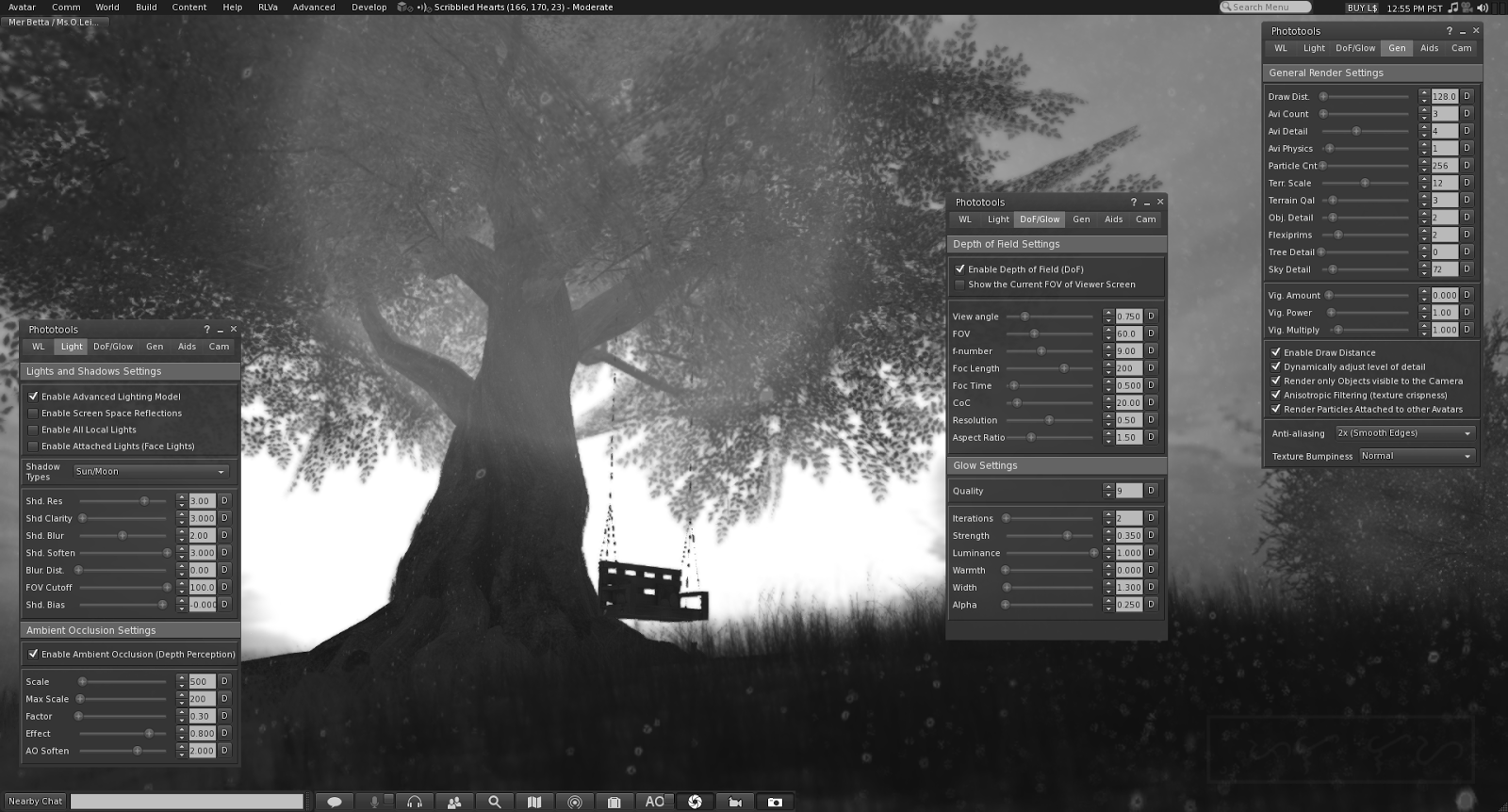