Dim Sum half-expects a Shakespearean actor to come out of the shadows. Thankfully, she can see better in the dark.


Remember I wanted to do something innovative? Ta-da!

Actually, this is something simple. It's just three invisible lights worn as attachments. Not even projectors. Then I just had to find the right position for Dim Sum to get the right lighting. And that's not easy because she kept moving around. The texture on that wall on the left kept getting blurry, and I don't know why. So I had to keep refreshing textures.

The cathedral was created by TheBlack Box. 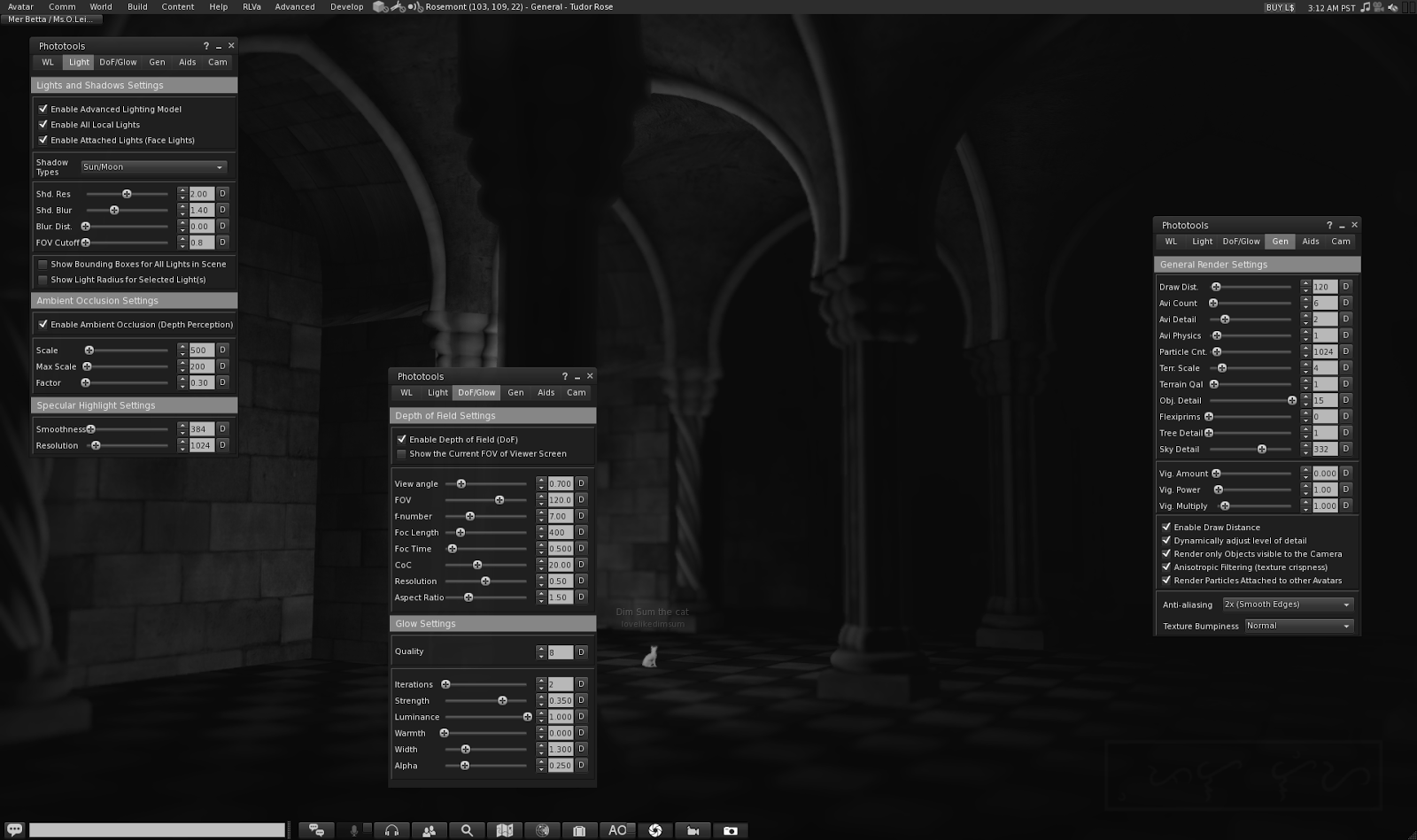 Dim Sum meows at the other white cat.
"Are you the doorcat?" she asked.
"No, I'm the bouncer," replied the other.
"Does it pay well?" she probed.
"I get all the tuna I can eat," boasted the other.


I was thinking this image is like a combination of this Goatswood pic and this haunted house pic, but I'm too tired to be innovative today. I'm actually supposed to be packing today and during the next few days.

The trick here is to figure out which one is Dim Sum.

The building is called "Medieval Town building 2" by Abel Dreamscape. 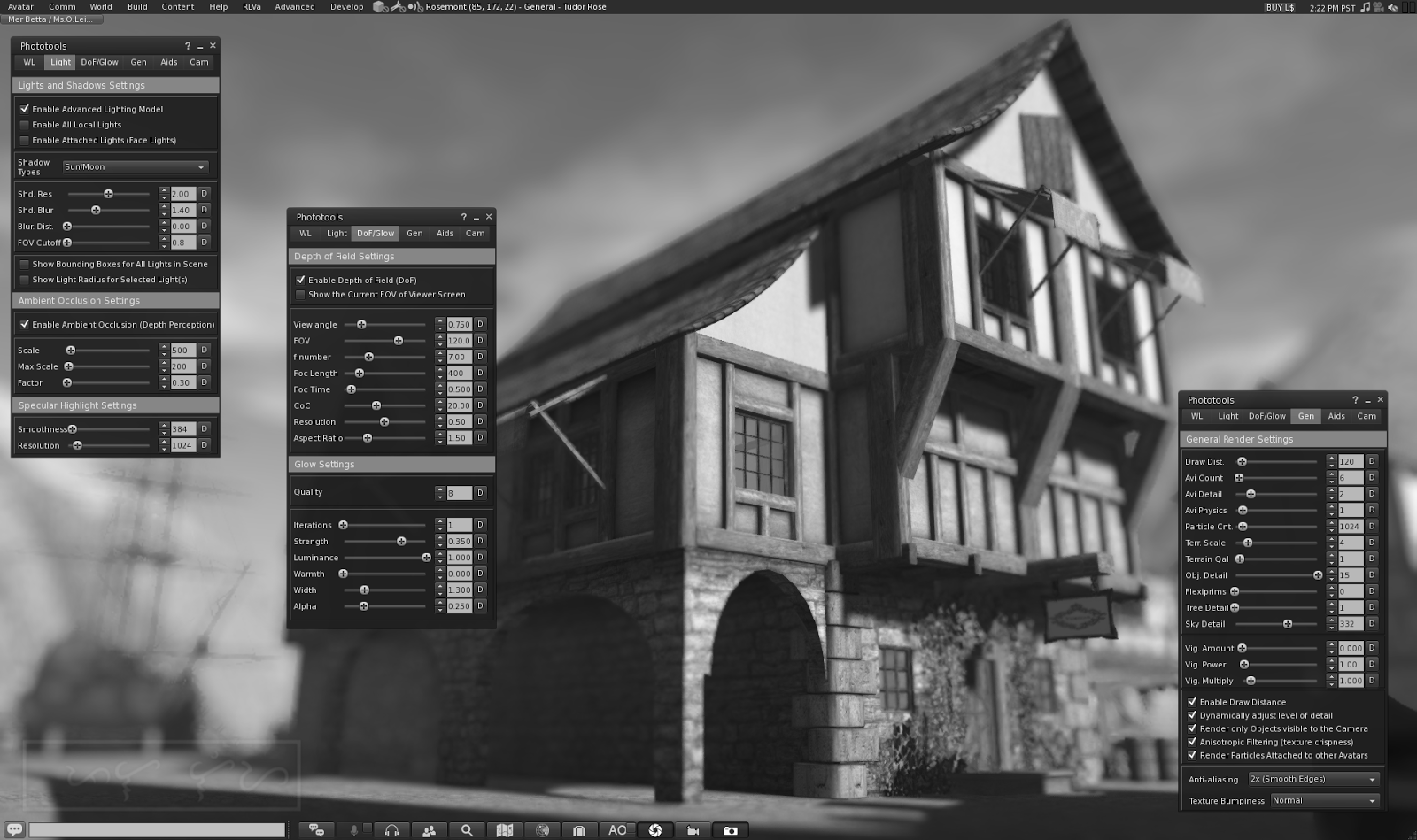 Dim Sum interrogates the sheep to find out what they know about the wool industry of the kingdom. But the sheep simply prodded her and wondered why her wool wasn't as thick or as fluffy as theirs. And they were shocked to find out that Dim Sum has never been sheared.


I couldn't get to the sim that I was invited to visit. I could see it on the map but when I try to teleport, SL says it couldn't find it. So I went to Tudor Rose instead.

While I was mucking with the windlight, a two-day-old newbie came really really close, and I thought he was going to bump me off my position. But he didn't. Then eventually, he moved around me, off camera. Then he came back again and got stuck in the tree trunk. So I said hello and he replied. Based on his name, I figured he spoke Spanish (or Italian) and when I asked him he simply said "jejeje". You could tell the Spanish-speaking people by their "jejeje" or "jajaja" laugh. ;)

Anyway, we had a short conversation with my broken Spanish and occasionally with Google Translate's broken Spanish. :) He said he's checking out this "juego" and I told him SL is not a "juego", but he could meet a lot of people here. Then I suggested he could go to live music events and, after he said he is also a musician in RL, then I sent him the URL to the wiki about music in SL. Then he escaped before I could give him more reading assignments. After all, who ever heard of getting homework from a cat inside a "juego"?  :D Dim Sum pretends to ignore the chirping, whirring, clicking talkative dolphin, who kept slapping the water to get her attention.


How do you take underwater pictures if you're a cat afraid of water?

There's a lot going on here. Reflections of the boats, pier, trees, and clouds above water. Hints of the dolphin, arch, and dome underwater. The froth of an incoming wave just below the surface. The shadow of a tree over the boats and the water surface. Very little DOF. 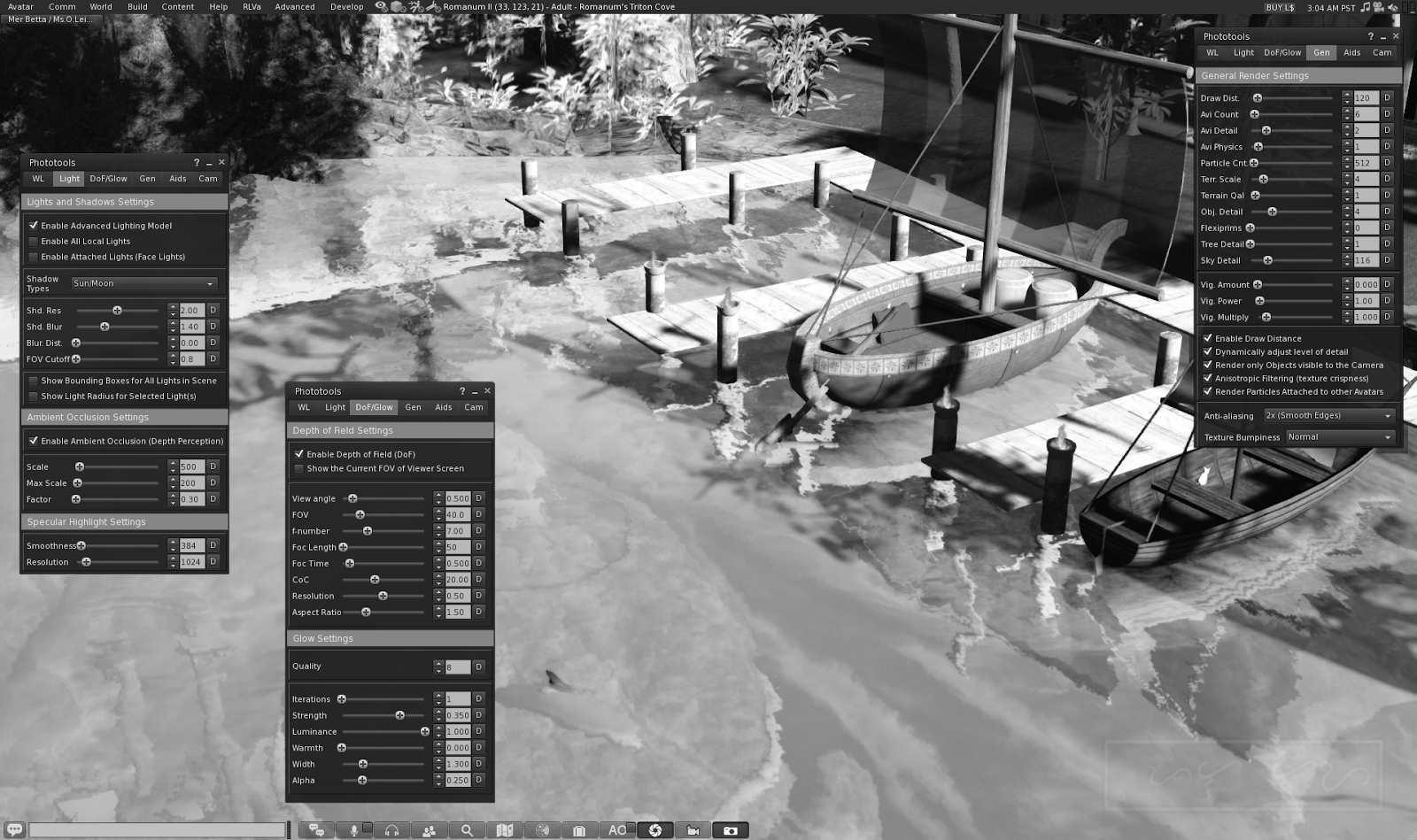 Email ThisBlogThis!Share to TwitterShare to FacebookShare to Pinterest
Labels: Romanum

Dim Sum quietly plans an attack on the unsuspecting swans, but, first, she has to figure out how deep the water is. She doesn't plan to lose another life so soon.


As I was playing with windlight and DOF, I noticed the crosshairs of the Emperor of Romanum on me. Uh-oh. Would I get kicked out?

I IM'd OOC that I was just taking pictures and asked if that was okay. Of course, I didn't tell him about Dim Sum's secret plan to attack his swans. He said, "No problem at all, little kitty." :D See? I told you white cats are welcome here. Or maybe only white cats named "Dim Sum," who meow sweetly.  ;D

And, apparently, Opal looks like royalty. Scroll down for my response to Strawberry's "Avatar Look-Alikes Challenge". 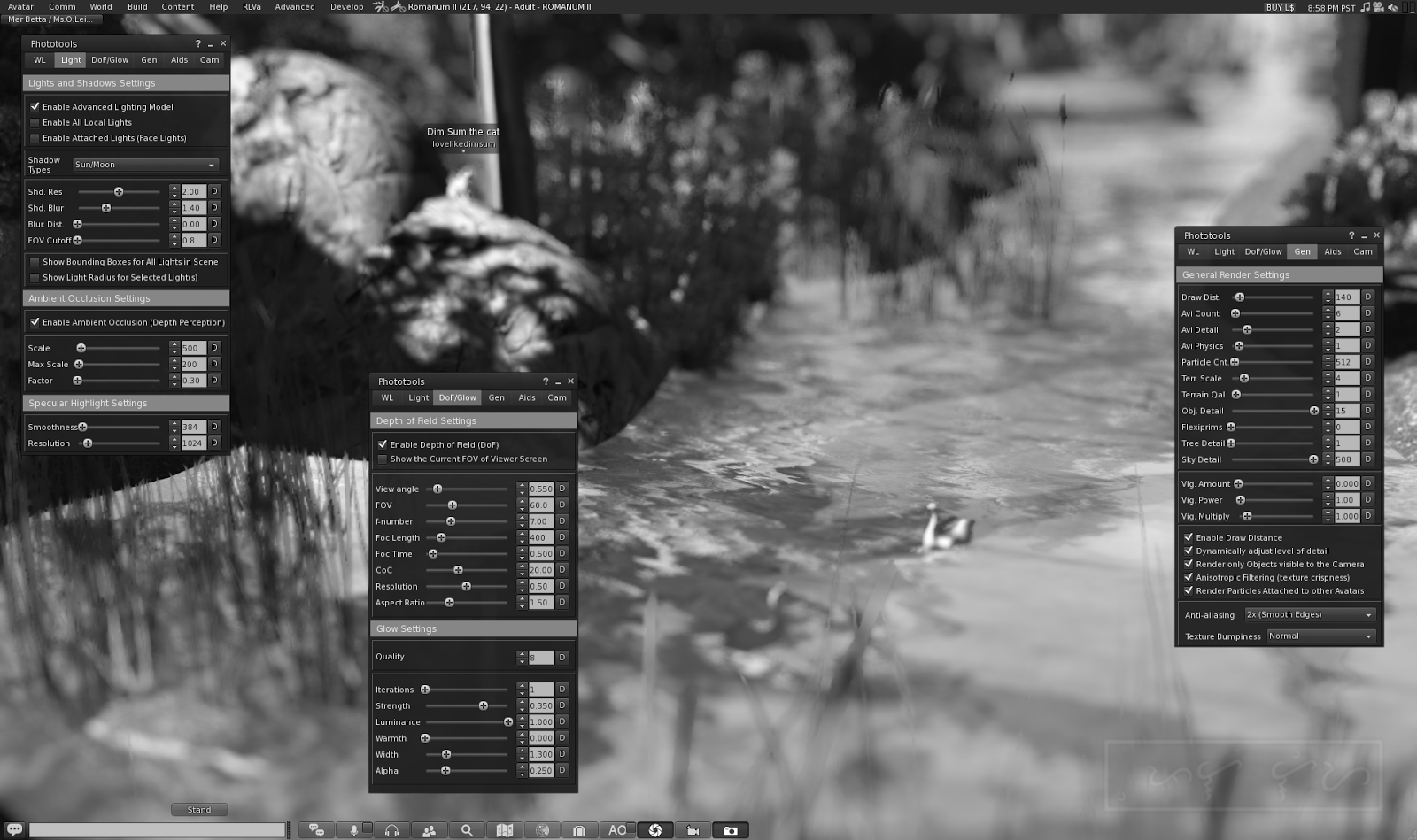 I didn't particularly make my avatar look like any real person. I based Opal's face on an imaginary face that I had been drawing as a child, and I tweaked my shape as I went along, particularly when I got new skin (which I haven't for ages now).

I went to the Celebrity Look-Alike Generator site that she mentioned, but it couldn't "see" a face in my current profile pic, so I used an older pic. And, apparently, Opal looks like royalty. Just the wrong gender.  ;) 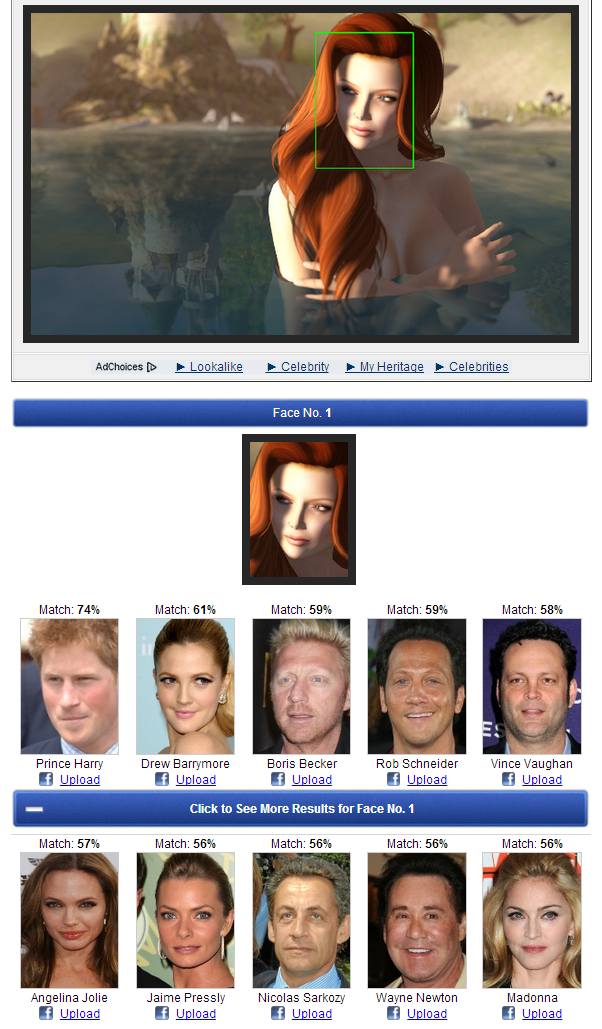 Dim Sum listens to the rushing river and sniffs the orange-scented air. If only all mornings were nice and sunny like this.


Michel Karmin was having problems with his Mer Betta tail. He asked for a tp, because he said I wouldn't be allowed in Romanum, where he was.

After we figured out that he was wearing the wrong parts of the product (and he later showed me many other interesting male mer parts), he put on several of his different mer avies, as well as other avies (a very realistic deer and a bat with its own dead tree that it hangs from). He has a gazillion of these avies!

Before he answered the call of "a cute Roman," who needed him, he gave me a notecard about Romanum. But the landmark took me underwater, deep in the mer domain. Dim Sum lost a life, I tell ya!

Romanum is an adult sim exclusively for gay men and white cats. (Well, the "white cats" part is not officially sanctioned, but shhhh!) It is a very adult sim. Not that I'm complaining about the very explicit sculptures all around the sim, mind you. This spot is probably the only PG part of the sim, although I haven't looked closely at the bas relief on that shrine. 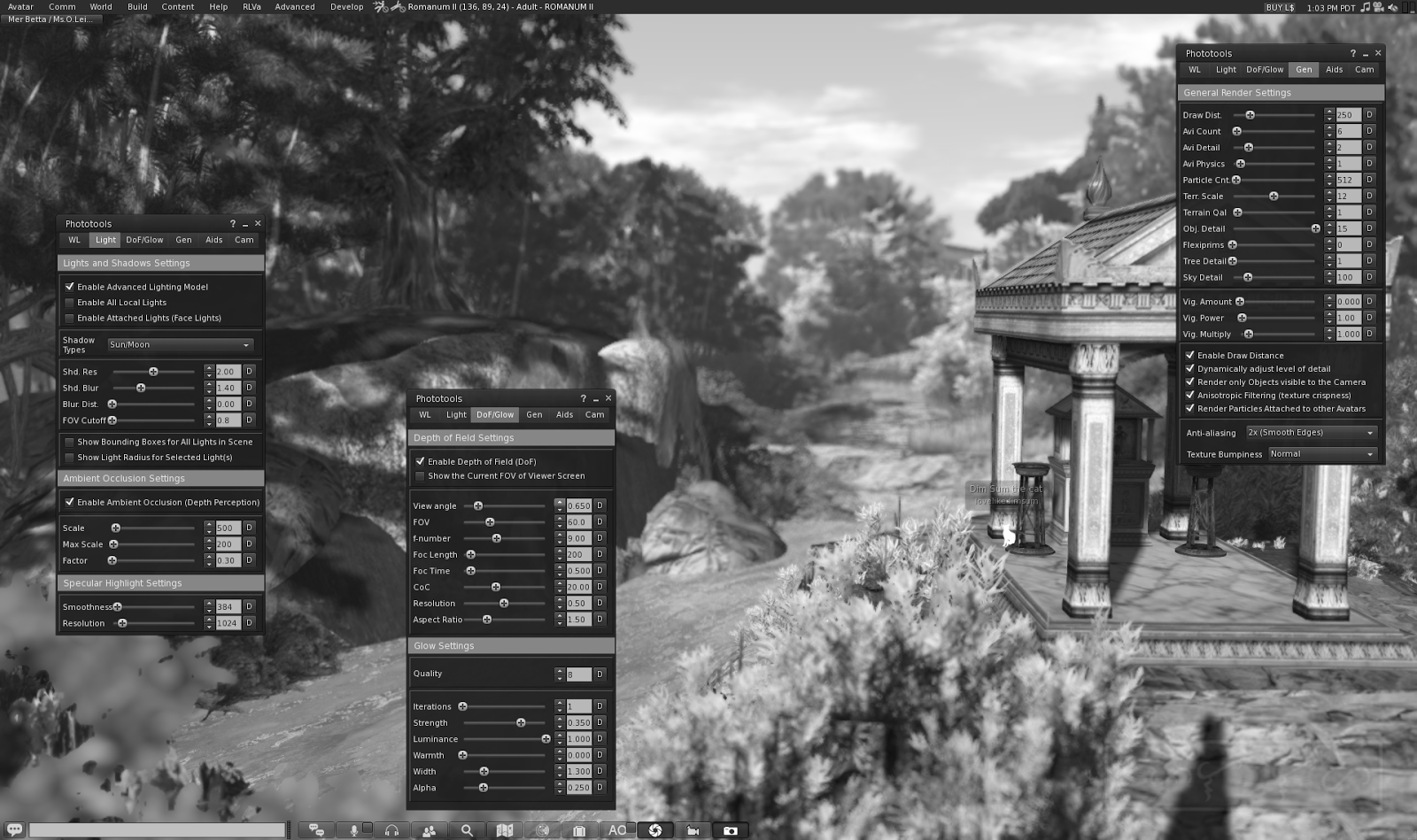