Dim Sum joins the peeps who wanna be bunnies. At least for Easter.


For non-US folks, "peeps" are marshmallow candies shaped like chicks that supposedly (I guess) hatched from the Easter eggs. So they're usually sold around Easter. However, "peeps" is also a slang word for "people", "often used to refer informally to the group of people who are someone's friends, colleagues, followers, family members, etc." (Merriam-Webster) ... et alts (Opal's addendum to Merriam-Webster's definition).

Merci beaucoup to Wolfgang who helped me with this shoot!

For his birthday earlier this year, I created a greeting card with the same floral letters on a white background and my different alts posing on and around them. So I figured I'd do the same with this greeting.

I prepared the windlight before bringing the avatars in, and I didn't realize that the shadows were harsh on the avatars' faces. But I was running out of time, so, ... oh, well, ... one has to make compromises sometimes. :) 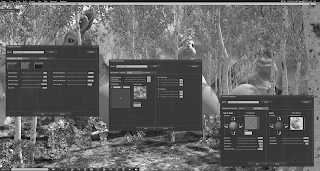